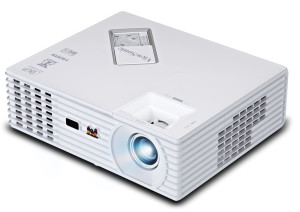 I must confess, I’m nuts about projectors. No need for fancy screens – if you can clear a plain wall of shelves and clutter you can have a cinema in your home. And I’m not talking about TV sized pictures: any decent projector should be able to create a huge screen that will give you a convincing cinematic experience.

It needn’t cost you much either. I’m a big fan of the current influx of economically priced, wallet-friendly projectors.  Let’s call a spade a spade—these things are downright cheap. And they seem to be getting cheaper and better by the week. Here’s the latest one to come in through my door.

THE PJD7822HDL IS A FULL 1080p HD projector in what Viewsonic calls the “home entertainment” class (more about that in a moment). Although I mainly treated it as such for the purpose of this review, its versatility extends to “business and education”. It’s light, portable (268 x 221 x 84.4mms WxDxH, weighing 2.1Kg)  easy to set up and includes its own 10 watt loudspeaker if you need to use it without an external sound system.

It’s a successor to last year’s PJD7820HD, now somewhat brighter at 3200 ANSI lumens with a 15,000:1 contrast ratio, which means you’ll get a perfectly watchable screen even in daylight. When I say “watchable in daylight” I’m excluding movies, because inevitably the ambient light will wash out the blacks. But for ordinary daytime TV viewing of news, shopping programmes or soaps, where the studio tends to be evenly and inartistically lit for general viewing, the screen image will be fine. And, when you want to watch a movie, just draw the curtains. No need for a light-tight room with a projector as bright as this.

The “home entertainment” class of projector doesn’t aim for the very high standards of ‘home cinema”, which tend to be large, permanently installed machines with superb optics,  lens shift, a wide ranging zoom capability and sophisticated electronic motion handling of the image. But that’s not the price bracket we’re in, and for the money you get just about everything you need for big screen family entertainment. And a bit more.

There are six built in “Colour Modes”—Viewsonic’s term for the sets of colour balance and brightness you can switch between using a single button on the remote control. “Brightest” as the name implies, gives you the full blast for providing a decently legible picture in full daylight. “PC” works well for charts, graphics and text, and if you want a little more oomph there’s also a “Dynamic PC” mode.

“Viewmatch” is Viewsonic’s proprietary invention, a rather elegant compromise that gives the brightest possible picture without compromising skin tones, which is useful if your business presentation mixes charts with film clips. In practice I found “Viewmatch” worked well enough for regular movie watching, particularly in surroundings where it isn’t possible to exclude ambient light.

Two additional modes “Movie” and “Dynamic Movie” are provided for use when you’re able to darken the room. Increasing the amount of colour filtering dims the picture somewhat but allows for a much more subtle colour rendition, and improves detail in the darker zones of the picture. These two modes can make movies look really good, given the chance.

The “Dynamic” tag means that the projector is automatically varying the brightness of the lamp in accordance with the scene being shown, dimming to bring out detail in the darker images and coming up to full power again to do justice to the lighter scenes. As a side benefit tuning the lamp like this increases its life while saving juice and cutting down on fan noise.

There are also two “User Modes” that allow you manually to tune the picture and retain the settings in memory. The Colour Management section of the menu lets you separately set the hue, saturation and gain of each of the six colours, Red, Green, Blue, Cyan, Magenta and Yellow, delivered by the rotating colour wheel.

As well as higher brightness, the PJD7822HDL improves on its predecessor by adding a second HDMI input (the usual legacy connections are catered for: VGA, Component, S-Video and, as a last resort Composite). Another addition is a full-sized USB A socket beside the miniUSB socket at the rear, a useful power source if you want to connect a device like Google’s Chromecast dongle.

The remote control isn’t backlit, but as a special feature includes a handy laser pointer.

Needless to say, the projector will also handle 3D, if your inclination lies in that direction. No glasses are bundled in the price, but the projector uses the DLP-Link standard, and you should be able to pick up a compatible pair on eBay or Amazon for anything upward from a fiver (prices for identical glasses vary crazily, so do shop around).  Without the sophisticated picture handling features like motion compensated frame interpolation that are built into higher end display devices you may notice a degree of judder during panning of the 3D picture, but I never found this distracting. And with 3D the high brightness really pays off, giving crisp images and a convincing sense of depth. I’m no great fan of 3D, but if you want it, the PJD7822HDL has got it.

One factor that has put people off projectors in the past has been the high price of the lamps and their relatively short life. The good news is that lamps last longer now and are significantly cheaper. Viewsonic claims 5000 hours for the lamp running at full power, extended to 6000 hours in if you consistently run in eco-mode.  Lamp replacements cost in the region of £175, which I calculate to amount to just under 3p per hour of viewing, or approximately 6p to watch a whole movie.

Apropos lamps, this might be the place to mention light spill. One paradox facing the designer of any projector is that stray light needs to be contained in a chassis that provides the minimum resistance to the intake and outflow of the air required disperse the intense heat of the lamp. Dedicated home cinema projectors go to great lengths to make sure the dark room you’re showing your movies in stays dark. Home entertainment projectors allow themselves rather more leeway, so with a projector like the PJD7822HDL you can expect some degree of light spill, although this will probably  only be noticed under dark viewing conditions.

In fact the PJD7822HDL does rather well at containing light spill through the air vents. But there is one problem that looks to me very much like a design bug, and it was also present in the earlier version of this projector. It’s a separate distinct beam of light actually emanating through the lens that shoots off at an angle of about 35 degrees from the axis of projection.

The strip of paper to the left of picture is out of the line of the main beam and should be completely dark. Here it’s catching the stray spill.

I’ve asked Viewsonic about this. So far I’ve had no response to the specific point that this stray light beam is emerging through the lens (unlike air vent spill I can think of no engineering excuse for this), but the company points out that the general level of stray light remains within spec for this class of projector.

It’s no big deal. If you’re regularly watching in a darkened room and the bright spot of light to the right of the screen actually bothers you it’s easy enough to improvise a lens hood of some kind. In other uses, for presentations, for example, it’s barely noticeable.

Speaking of presentations, the PJD7822HDL includes a couple of features specially designed for this purpose. The small remote control has a button in the top right hand corner that switches on a laser pointer. And the setup menu includes a provision for adding a small, discreet countdown timer at the bottom of the displayed picture, so that your presentation doesn’t overrun its allotted time.

Some reviews of this projector have referred to it as “short throw”, possibly misled by early versions of Viewsonic’s marketing material. A true short throw projector is able to produce a picture with a diagonal measurement larger than its distance from the screen, in other words, a throw ratio less than unity (1:1). The PJD7822HDL has a minimum throw ratio of 1.15, which maxes out at 1.5 with the zoom at its full extent. This is certainly a shorter throw than many other projectors in its class, meaning it can comfortably project a 6ft diagonal screen from a little over 6ft away. “Reduced throw” is a better term for this, and that appears to be what Viewsonic is now calling it.

Viewsonic has always been generous with its warranties, and it’s reassuring to know that this projector is covered for three years, the deal being that if the projector malfunctions within that period Viewsonic will ship you a replacement and do a doorstep swap. The lamp has a similarly structured guarantee, but limited to one year only.

The PJD7822HDL is a projector you might buy for work (tax deductably?) but which would be equally at home hooked up to your Blu-ray player. The reduced throw feature makes it especially valuable in smaller living rooms, and the extra brightness means you don’t have to pay special attention to removing all the ambient light. The through-the-lens spill I mentioned is a puzzling glitch, but at this price—officially around £550 inc VAT, but under £500 if you shop around—it would be churlish to carp.