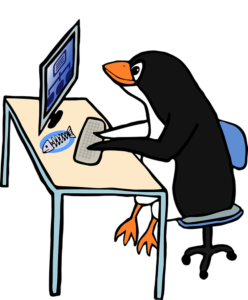 Now is the time to switch to Linux.

Really? Well, let’s think this through. It’s not the place of Tested Technology to tell readers what operating system they should be using, so we’re definitely not instructing you to drop Windows or MacOS if that’s what you’re using. Getting the work done on the machine is the most important thing and if you’re fine with either or both of those two proprietary operating systems, so be it.

But why not read on, anyway.

If you’re in the mood to switch, if you’ve ever thought of switching, if it’s ever crossed your mind that being dependent on a mind-wateringly rich and powerful IT company may not be in your own best interests, now is definitely the time to consider the jump to Linux.

Actually, a jump isn’t what I’m recommending. Switching to Linux should be a process.

I’ve been tracking, writing about and using Linux since around the mid-1990s. Back then, Linux for me was a pile of 10 3½” disks loaded onto a Thinkpad. Everything was done on the command line. I think there was an X-Window GUI available, but I couldn’t get it to work.

Since then I’ve worked regularly with a mixture of MacOS, Windows and Linux. Until the end of last year, when I switched Tested Technology production, lock, stock and barrel over to Linux.

I’d become increasingly uncomfortable with Microsoft Windows. Lots of reasons. Some of them very minor: for example I was getting fed up with the login window that greeted me each time with “Welcome” as if I were being treated as a guest on

my own computer. A reminder that I was in a sort of shopping mall owned by Microsoft. And error messages generally implying that the problem was me rather than the rusty old entrails of the operating system.

It was asking me to log on using a Microsoft account, which I thought intrusive. There was a workaround, which I’ve since forgotten, but it was the very act of having to implement this workaround that set me thinking about all the hoops Microsoft makes you jump through. And I was reminded of all those hoops again when I found I had to do a complete Windows reinstall on one of my laptops,

I was always more sympathetic to MacOS. Mostly it did “just work”—although never as elegantly as the NeXTStep operating system that MacOS is based on. I was devoted to NeXTStep in the early ’90s, was sad to watch it wane and then delighted when Apple took it over in 1996.

The takeover wasn’t so much to rescue the beautiful NeXTStep as to rescue Apple itself from the mess that the official Macintosh operating system, MacOS 9, had become.

At the time, I was writing a column about Unix-style operating systems for a now defunct print magazine. On the strength of this, Cupertino kindly bequeathed me a Power Mac G4 so I could pilot readers through the inception of the new MacOS X (the “X” pronounced “Ten” to keep it classy).

Apple’s rewrite of NeXTStep to become MacOS X in 2001 had carried over all of the BSD Unix underpinnings, so it was solid enough. But Apple had had to compromise with the hangover from MacOS 9, making some ugly changes to the user interface and—more importantly—adding a pile of bells and whistles to the underlying Unix file system to match the expectations of long-term Mac users.

More recent updates to MacOS have been adding yet more unnecessary complexity. I may be wrong about this—keen Mac users may be finding these refinements really useful. But there’s no arguing with the fact that the lock-in to Apple ties you into proprietary hardware that increasingly seems to be designed never to be repaired outside the company’s own expensive service arrangements.

I won’t go on about this. If you’re interested in switching you’ll have your own reasons and don’t need to hear mine. The key points are: I was looking for more simplicity, for more transparency and for less dependence on a couple of IT companies that are getting too big for their boots.

And the other factor was that Linux is now far too good to ignore. It’s become a fully-fledged, modern, modular operating system that you can tailor precisely to your own hardware and tastes. And the best thing about it is that you can plunge in fully without having to burn any bridges.

*That operating system could well be the originally installed Windows 10, although in my case it was mostly another version of Linux I was exploring before I discovered how much could be done from a tiny USB drive costing only a few pounds.

Yes, no need for a precipitous switch. For several months I was running Linux from a tiny 32GB USB drive stuck into the side of the laptop, leaving the laptop’s installed operating system intact*. More about how this works in a later episode.

So what I meant to say in that opening sentence is that if you’ve ever considered switching away from the two dominant operating systems, Linux is the way to go, and now is the time.

In part 2 we’ll get deeper into the specifics.