For Your Eyes Only: 32°N sunglasses 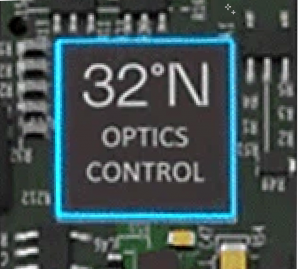 Six years ago, Tested Technology was writing about a pair of UK-designed reading glasses that the wearer could tune to compensate for any inability to focus at short distances. The science behind these tuneable lenses was simple. Each lens was in fact a pair of lenses. A sliding mechanism controlled by a rotating button would move one of the pair into a different relationship to the other. This would change the total thickness of glass the light had to pass through at different points, refracting the light rays differently at each point. Changing the settings of the two sliding mechanisms would modify the focal lengths of the combined dual-lenses.

The finished product was ingenious and relatively cheap to produce, selling for around £50 a pair. An earlier, functionally similar product developed in the US by a company called PixelOptics had been on the market for $1,200. The very much higher price was because the technology was electronic rather than mechanical, with lenses whose focal length could be changed at the touch of a finger to control the voltage fed across liquid crystals embedded in the lenses.

The electronic glasses were an attractive proposition. But the company failed for multiple reasons. Primarily because reportedly every item had to be expensively hand-tailored at the factory for each individual customer. Manufacturing faults resulted in many returns so that ultimately every pair of electronic glasses leaving the factory gate represented a cash loss.

Last week, in one of my very first press outings this year, I found myself sitting down at a table in Mayfair’s Chesterfield Hotel with Alex Alon and Yariv Haddad, the co-founders of an Israeli company called Deep Optics. I’d journeyed across London in hot bright sunlight to see the offering they’re launching today (15th June 2021) on KickStarter.

A transparent pre-production mock-up of the DeepOptic 32°N sunglasses showing the internal electronics.

Yes, they’re electronic glasses, with a proposition very similar to PixelOptics’ but with a rather different technological approach. These are sunglasses rather than plain reading glasses, although unoccluded lenses are in Deep Optics’ timeline. In fact the company has the ambition to push the possibilities much further towards a pair of glasses that will know what it is you want to focus on and automatically adjust the lenses accordingly.

Tested Technology is hoping to offer a full review of Deep Optics’ “32°N” sunglasses once the product is on the market. For now, I can only give you my impression of the pre-production sample I was able to try briefly at the Chesterfield.

At the projected selling price of around £250 for early KickStarter investors, they’re certainly a more attractive buy than anything PixelOptics was able to produce. Would I have plonked down cash on the table for what I saw at the Chesterfield? Frankly, no.

That’s by no means to say that the ultimate product won’t be worth a punt. The promise is enticing. I’m what ophthalmologists call a “bi-lateral pseudophakia”, having had the lenses of both eyes replaced with fixed focus plastic substitutes. The cataract operation has left me with excellent distance vision but the need for reading glasses for close-up work. On sunny days, therefore I tend to juggle my Ray-Bans with my Poundlands. The “32°N” sunglasses would put a stop to all that.

Putting them to the test

It would be unfair to base any final judgement on why those pre-production 32°Ns didn’t work for me. But I’ll report here how it went. 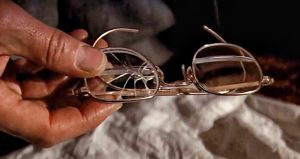 Under the conditions of the demo, the required set-up procedure seemed awkward and somewhat hit-and-miss. Bluetooth connects the glasses to your phone—it’s needed for the set-up but then plays no other part in the operation. You first take a selfie to establish the central position of each lens so that it corresponds accurately with the anatomy of your eyes. The next process blurs most of the lens except for a narrow horizontal strip which the app is able to move up or down.

The idea behind this second stage of the set-up is to find the best angle to place the near-focus part of the lenses. This is because the upper portion of each lens will always remain at distance focus, effectively like the incriminating bi-focals Gittes finds in the saltwater pool (a reference slipped in for movie buffs). DeepOptic says this is a safety feature so that any misbehaviour of the lenses during an activity like driving will always leave you with usable vision.

I found this part of the set-up particularly confusing, perhaps because I didn’t properly understand the objective. It took several attempts to get this right. But once we had this properly established the glasses were fully tuned and ready for the test. There’s no need to carry out this procedure again, at least until your prescription changes over time.

Now the glasses were behaving like any ordinary pair of quality sunglasses, occluding the bright sunlight flooding in through the skylights of the Chesterfield restaurant but leaving me with well-defined and detailed medium and distant vision. A finger-stroke along either of the two temples (the optician’s name for the two arms that hook behind the ears) switches in the near-vision and I’m able to read the small print on the Kindle that Alex is showing me.

Proof of concept? Definitely. The technology works, no question. But the logistics?

Fitting into the market

As my distance vision is fine I usually only need to carry a single pair of glasses. Except on very sunny days like this, when I’m also carrying sunglasses*. Juggling the two pairs is a nuisance. But if I was that bothered, there are some simple solutions: a cheap flip-up clip-on sunglasses attachment to my reading glasses or, more expensively, near-focus sunglasses. Or perhaps photochromic, near-focus glasses that automatically darken as the sunlight gets brighter. The trade often refers to these as “transitional lenses”.

*Why 32°N? you ask.  Apparantly the name was chosen as it’s the “latitude of sunny cities”. I have to say that London (latitude 51.5°N) was every bit sunny enough on the day of the Deep Optics demo.
And then there’s the cost. The most expensive of the solutions I’ve just mentioned, photochromic reading glasses, tailored to my eyesight at +1.25 dioptres, would knock me back £25. I could have ten of those for the early-bird price of the 32°Ns.

The distinction, of course, is that I wouldn’t be able to wear these 25 quid near-focus glasses all the time. The use case that Deep Optics promotes as its prime selling point is that smartphone users consult their phones 58 times a day. I probably double that rate. So I’m popping my reading glasses on and off over 100 times a day whereas with the 32°Ns I can just leave them on, temple-swiping to focus on my phone as required.

If you’re new to Kickstarter it’s important to understand that any payment you make is a pledge, not a purchase. The product is a “reward” for that pledge which the Kickstarter creator has no legal obligation to deliver. Likewise, any refund would be discretionary not obligatory.

How that works in practice is something we’ll discover in the upcoming review.

I’m certainly keeping my fingers crossed for the 32°N’s success in the market. If only because the product is a strategic stepping stone to the eventual goal of those self-focussing regular day glasses.