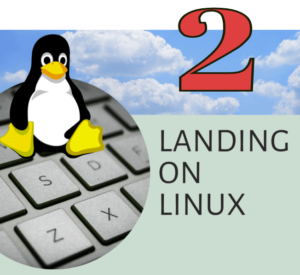 Let’s not go there yet. There is no rush.

You may feel that Microsoft is getting too big for its boots now that Windows 11 is inserting adjunk as well as its longstanding appbloat. Mac users looking for an exit strategy from an ecosystem with runaway hardware costs (and hardware repair costs) and an operating system that is starting to get a shade eggy may be in the mood to bail. But there’s no need to hit that ejector seat button right away.

The switch to another operating system is never trivial. No, let me rephrase that: the switch itself is usually no big problem; discovering the basic ways and means to carry on with the work may take a little time; what will drive you mad will lie in the little things. The trivia can be infuriating.

It’s entirely feasible to wipe Windows, install Ubuntu and get back to work the same day. Depending on your work. If it entails using the basics of Microsoft Office, Ubuntu comes with LibreOffice installed and you should be up and running right away. If, on the other hand, you’re deeply into Excel macros, yes, you will have a multiplicity of problems. Small, perhaps, but irritating.

For Mac users it can be tough. The phone, the laptop and the tablet all nicely mix and match. The garden walls are too high to see over and it all feels like home. If that’s your strong feeling you probably are at home, and should stay there. Why not? But why not stay here, too, and read of possible adventures beyond those garden walls. And perhaps even participate in a few harmless experiments?

The one thing you can do, right away, is start looking for open source substitutes for the proprietary apps you’re currently using. Learning to manipulate images, for example, with the GNU Image Manipulation Program (Gimp) instead of Photoshop can be a tough call if you’ve spent a lot of time in Adobe-land. But it won’t just save you the annual fee of $240. It means that the skills you learn will no longer be increasingly locking you into, not only Adobe, but also your choice of operating system. Gimp runs everywhere.

I spent about a year ambling towards the all-Linux setup we’re running now at Tested Technology. I was still using MacOS and Windows apps but started being choosy about what those apps were. Apple’s word processor, Pages and its spreadsheet called Numbers were certainly comfortable to use. But learning their ins and outs was an investment of my time—an investment that was locking me in tighter each day to something I was hoping to say goodbye to. Rather like doing a full redecoration of a house I was only renting.

Here’s a YouTube video that gives you a taste of the sort of open source apps you might want to think of switching to.

The LibreOffice suite runs very nicely on the Mac. And on Windows. And, of course, on Linux. Likewise Gimp. And for general notetaking I picked Joplin, another open-source all-rounder.

WordPress, the platform that delivers Tested Technology, is of course Cloud-based. It runs on the World Wide Web and so is by definition cross-platform. Which reminds me that what we’re talking about here is a three-pronged strategy.

First, I was seeking out free-as-in-freedom, open source apps that would cost nothing and run anywhere. The cost-nothing part was always the least important but it’s coming more to the fore now that the cost-of-living is on a steady rise. Next, now that the Web, thanks to HTML5, has become so much better as a platform for its own class of ubiquitous PWAs (Progressive Web Applications), I started looking out there to fill any gaps in functionality.

Linux is weaker than the other Big Two in optical character recognition (OCR), for example. The Web comes to the rescue with the Copyfish OCR plugin for the Chrome browser—great for swift small jobs—or PDF24 for larger jobs.  Occasionally, I need to run OCR on complex spreadsheets where neither of these solutions is much good. But there’s always Docparser for complicated OCR. You have to sign up for it and only its basic service (which includes a fast and friendly help desk) is free to use. But if I want more than its basic service (I currently don’t) it’s all there when I need it, using any browser on any operating system of my choice.

The third prong of the strategy is to find proprietary applications from developers clueful enough to offer their paid-for apps across all three platforms. Sadly, they seem to be a diminishing minority. Keith Blount, whose Scrivener app is a huge hit with fiction and non-fiction writers, as well as essay-writing students and PhDs, launched across all three platforms but has since left the Linux branch to wilt on the vine. I miss Scrivener. But these days Joplin does most of what Scrivener did for me, and more.

Blount, in the early 2000s, was a UK writer, struggling to create a novel with Microsoft Word and Excel. He couldn’t find a writing app that did what he wanted, so he bought a book on Objective-C (at the time, the preferred programming language for the Apple Mac) and knuckled down, finally producing Scrivener in 2007.

Over in the US, another writer, with his eye on Hollywood, was on a similar journey. Unhappy with the price and reliability of the so-called “industry standard” screenwriting software, Final Draft, Kent Tessman decided he would learn enough programming to put his own app together. FadeIn Pro arrived in 2011 and its low price (less than half that of Final Draft), clean functionality and ability to run across the Mac, Windows and Linux, guaranteed it solid placing in a very competitive market. Tessman’s own scripts haven’t yet been greenlighted in Hollywood, but his software is now firmly established there. Unlike Scrivener, Tessman’s FadeIn Pro is actively maintained on Linux. And it’s what I use.

More recently, I’ve turned to a proprietary vector graphics application called Boxy SVG. It runs on all three major platforms and the Web and I’ve used it to create the illustrations to this piece (it’s particularly good at handling text).

It’s a paid-for app on the Mac (around $20) and there’s a subscription model for the version that runs on the Web (around $10 a year for the basic version and another optional $90 a year to use their Cloud storage).  However, the developer, Jarek, offers Boxy SVG across a variety of Linux versions at no cost.

So that was my Phase One, and it could be yours. You can start severing your dependency on a particular operating system by graduating to applications that work on all three major platforms, whether they’re free software apps, Web apps or proprietary apps. That way, even while you continue to stick to your original operating system, the investment you’re making every day in developing your application skills is a growing portable asset with a future.

There’s one other thing that Windows users can do. I did this early on with Windows 10. I don’t know if it carries over to Windows 11 because I’d stepped off the juggernaut by then, but it’s probably worth investigating. It’s a very handy Windows debloater called WinSlap, written by the German IT Security engineer Sven Mauch.

While you’re continuing to use Windows you will probably appreciate the ability of WinSlap to remove the tangled mess of telemetry (constant feedback to Microsoft of information about your use of the system), bloatware and other unwanted junk that Redmond delivers retail. WinSlap lets you decide how much or how little of this you’re prepared to put up with and also provides the option automatically to download and install a number of useful free software applications, including several already mentioned here.

We’ve now done the Ready and the Steady ﬁrst two parts of Landing on Linux. The Go, part 3, comes next. But we’ll still be flirting—it’s not yet a commitment.