Ever lost your files because you didn’t have backup?

Mac Backup Guru 2.0 is designed to be as simple to use as Apple’s Time Machine, but as reliable and powerful as products like Carbon Copy Cloner and SuperDuper. What’s wrong with Time machine you may ask…if you’ve never tried to retrieve something from it. As clever as it is, it isn’t quite the rock solid reliable backup option you might think. It’s very slow to use, and the backups it does do,  fail to backup all the metadata that should be part of the files it saves.

Metadata is information about files, likes creation dates, tags and other info. It might not seem important, but it can be disastrous in some cases. If you’re going to the trouble of doing a backup, it’s worth making sure it will work properly.

Mac Backup Guru 2.0 copies everything, including all the metadata, flawlessly. Which means you can be absolutely and positively sure that your backup will be perfect. The number of backup apps that achieve that is surprisingly low. The ones that do, like the very powerful Carbon Copy Cloner, tend to be an all bells and whistles experience. Which is great, but only if you know what you’re doing. MBG 2.0 strips out all the confusing stuff from the interface, while retaining the powerful features, like bootable backups and versioned backups.

That means you won’t find yourself scratching your head about settings. It also means that it’s ideal for parents, grandparents, and the hard of thinking. I can’t say it’s 100 per cent fool-proof, but it’s close. 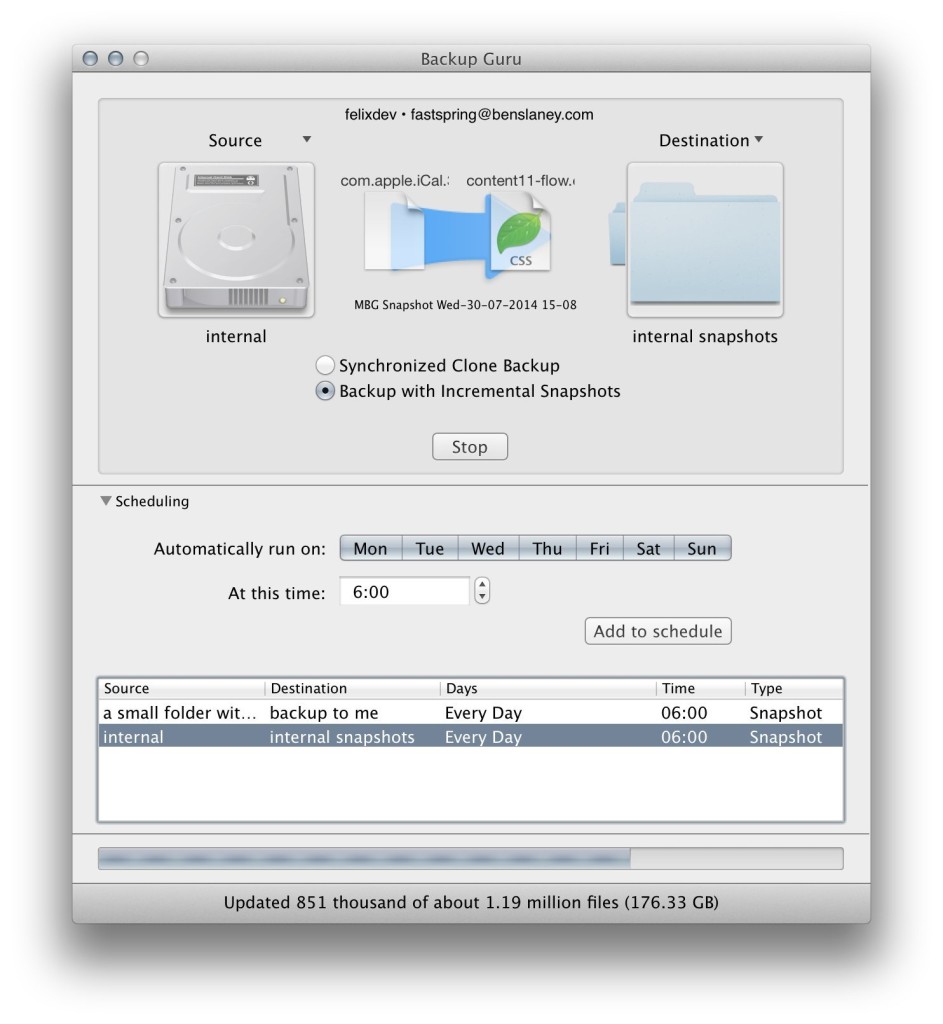 Pick a source, then pick a destination. Your mum could do it.

Advanced features
There are two main reasons for needing a backup, two main ways for disaster to strike. Either your computer, or hard disk fails, or you accidentally delete or save over some work you have done. Whichever type of mishap befalls you, you will want to solve the problem quickly.

If your hard drive fails and you have backed up with Mac Backup Guru 2.0, getting back to work is as simple as restarting with the Alt key held down. When your Mac asks you which drive to start from, point it at your backup, and you will be able to start up and carry on, losing only the files you created since your last backup. This bootable backup is the sort of advanced feature that is optional on other more complicated apps. But it is the default with Mac Backup Guru 2.0 because why would you ever choose not to have a bootable backup?

If it’s a file or folder you deleted, it’s even easier. Just look on the backup drive for it. You’ll have to have chosen the Incremental Snapshot mode for this to work, as that will keep a snapshot of your drive taken every day, for as far back as your hard drive can carry.

You would be forgiven for thinking that each of these snapshots would fill your backup drive pretty quickly. But due to some spectacularly clever programming, and something called Hard Links, the backup drive only needs the capacity of the first backup, plus the space for any deleted files, to work. So even though it will appear that you have dozens, even hundreds of folders containing the entirety of your backed up disk. It will still fit on a drive only marginally bigger than the original.

Bootable backups, incremental snapshots, and synchronised backups are about all most people need when it comes to backups. And you won’t find a simpler way to do it that Mac Backup Guru 2.0.

The Five Minutes Test
You may already feel comforted that you have already secured the files on your computer. Perhaps you use Time Machine or one of the cloud backup services, maybe you rely on Dropbox. But now imagine your hard disk just died in a puff of smoke.

How soon will you be able to start working again. If it will take you longer than five minutes, then that’s too long. If you can manage it in under an hour, that’s pretty good. But most people would struggle to get up and running again the same day.

If you are using a cloud service to backup, you either didn’t backup your whole drive, or it took days to upload. So it will likely take days to download it again, once you’ve reinstalled your system software. Dropbox is great at securing your latest documents as soon as you save them. But it can’t replace a whole hard disk, it’s not designed for that.

Even the better known backup apps that have been around on the Mac for decades, like Retrospect, requires the Retrospect software to be installed before you can restore from your backup.

Only software that can create a bootable backup can get you up and running in five minutes. The other stuff, especially Dropbox, is a great backup for your backup. I’m very much a belt and braces kind of guy. But having a backup that takes a week to restore because it’s in the cloud is pretty worthless to me.

Do you even backup?
I know some brave souls that don’t backup at all. After all, hard drives are much more reliable than in years gone by. Is it really such a risk?

Well it’s true that drives are pretty reliable now, and even if they do start to fail, software like Mac Data Recovery Guru (from the same developer) can usually retrieve at least some lost files. However the advent of SSDs, that’s solid-state drives, introduces a new level of danger. That’s because, even though they are reliable, they still have a limited lifespan. When that lifespan comes to an end, and the drive fails, you can’t use hard drive data recovery tools, or n fact ANY tools to recover the data. When they die, they die completely.

Conclusion
There are certainly more complex, higher end backup applications. But whether they offer the average user anything to warrant the extra cost is debateable. If comparing Mac Backup Guru 2.0 to Time Machine, it wins hands down. It’s like a reliable version of Time Machine, with all the unnecessary decoration stripped of. Making Mac Backup Guru 2.0 the leanest, most efficient and reliable option that is suitable for everybody from novices, to advanced users.

Cons: More control over scheduling would be nice.