Equipped with the new battery-driven quartz technology, watches far more accurate than the most carefully designed and manufactured mechanical chronographs known to watchmaking were being churned out by the millions and sold for relative peanuts. Quartz Roolz.

And for a while, it did. But Switzerland rallied, steering the market steeply upwards, emphasising craftsmanship and investment value. Besides, batteries are the Achilles heel, introducing messy chemistry into the previously pristine domain of pure mechanics. Real mechanical watches are not a commodity, Switzerland told the world. Regard them as jewels. And Joolz Roolz.

Japan responded with its own line of high-end mechanical watches but the kudos of Swiss engineering continued to have the edge—until the very end of the last century when Seiko pulled off its master-stroke. A luxury quartz watch with an entirely new design, finally perfected after two decades of research.

Seiko’s Spring Drive range of watches combined high craftsmanship with the split-second accuracy of quartz. And—driven by the same kind of swinging rotor used in mechanical self-winders—they needed no battery.

Today, that same battle goes on. But there’s an entirely new upstart technology bidding for what fans of the watch like to call “wrist presence”: the smartwatch. Leaving mainsprings behind and relegating timekeeping to little more than a walk-on role, the modern smartwatch jumps through hoops undreamt of by the Continental 17th-, 18th- and 19th-century pioneers of timekeeping.

But the battery it depends on remains its Achilles heel. Many of them need to be recharged daily. But not Huawei’s GT2 Pro. 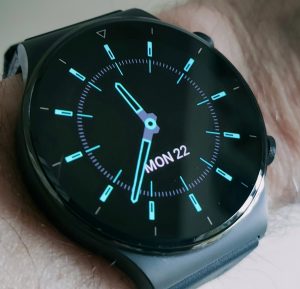 THE HUAWEI GT2 PRO EXEMPLIFIES the very best of Chinese manufacturing, as indeed it should at this price point of around £230.

The lightweight ceramic-backed titanium frame is faced with highly scratch-resistant sapphire, which protects an AMOLED screen capable of displaying 7 lines of easily legible characters. The sturdy but very comfortable silicone strap supplied with the review sample is suggestive of a diving watch, a reminder that the watch is water resistant, although only to shallow depths. With ordinary use, the battery will run without recharging for as long as a fortnight.

“Ordinary use” here means allowing the watch display to switch on only when you lift your wrist and also precludes all the battery-intensive health features like constant heart rate monitoring. If you want to have everything running all the time—constant display of the time with the full health-check monty—this gets reduced to a couple of days. Between these two extremes, there’s a wide choice of performance versus energy-saving options. I’ll tell you how I got on with this later.

The watch is controlled with a pair of buttons at the two o’clock and four o’clock position. The upper button switches from time display to a menu of available functions and the lower button can be programmed to jump directly into any one of these. When not displaying a watch face the screen responds to touch. Touch control is limited to scrolling vertically or horizontally or menu-picking with a single tap.

Some of the features the watch offers depend on the always-on Bluetooth link to your phone, running the Huawei Health app. Using this connection, the screen can display your phone’s notifications and the weather for the week ahead. Thanks to the watch’s internal speaker and microphone you can even conduct phone conversations through the watch as long as your phone is within Bluetooth range. 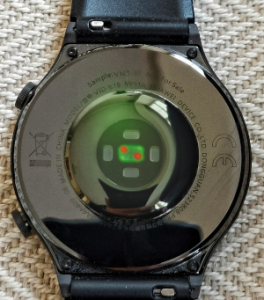 But many of its functions are built-in. LEDs in the back of the watch that send modulated light into your skin and sensors that read how that light is returned can measure your pulse rate and the level of oxygen being carried in your bloodstream. An accelerometer detects the nature of the movements you make, reading your pace when you walk or run and reminding you to move when you’ve been sitting too long. An air pressure sensor guesses your altitude, tracking the slopes you ascend and descend as you exercise outdoors, while its built-in GPS system tracks your location in real-time, sending back a map of your outing to your phone.

The GT Pro can also—completely independently from your phone—store music and play it back to you, either through its own tiny speaker (if you’re a sharp-eared masochist) or over Bluetooth to your headphones or earbuds. There’s plenty of room for that music too—the watch has a total storage capacity of 4GB.

Its built-in sound system has another feature you’re either going to like or hate: a transatlantic sport’s instructor’s voice to cheer you on as you exercise. “Your heart rate is aidy-seven. Try to stay between ninedy one and one hunndert and twendy”. If you’re listening to music over Bluetooth as you exercise the voice cuts in over it. More of this later.

This is a watch that has won the highest possible praise from YouTube “influencers”. Tested Technology tends to ride along with this wave of enthusiasm, although with some important caveats.

There’s no question that the build quality of this product is excellent. And the industrial design is elegantly simple. But not beyond criticism.

Why is it round? Evidently because Huawei wants to emulate the classic shape of traditional mechanical watches. The roundness of a mechanical watch is dictated by the analogue display. Some watches, like the classic Cartier dress watch, may be squared off. But within that square the display remains effectively circular, with the hands unable to reach the corners. The classic Cartier watch is really a much smaller round watch in an oversized square frame. 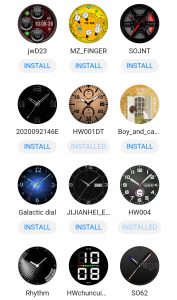 A smartwatch is able to display either an analogue or a digital clock interface. The GT2 Pro gives you a wonderfully wide choice of watch faces, which we’ll be exploring later. But watches like this also, importantly, display text—in the case of the GT2 Pro as much as 20 words of legible text and you can scroll through much more than this with the touch of a finger. For this purpose, a squared off face would be far more appropriate. In making this design choice Huawei would not be slavishly copying Apple (although many manufacturers do); simply insuring that form follows function.

I have some other design quibbles. The two push buttons protruding from the right side of the watch are designed to resemble the winding crowns of a traditional watch. Winding crowns are, of course, physically rotatable. And so are these—but to no visible effect. It may be that a future firmware update will allow rotating these buttons to do something useful but their small diameter would make this a fiddlesome way of invoking functions.

If Huawei had borrowed from the classic dive watch the concept of a rotating bezel with definitive click positions, this would have opened up a very much better way for multiple internal functions to be surfaced for the user. And, of course, this would also have justified the use of a round design.

As it is, the two buttons themselves are relatively dumb. You might expect them to respond variously to a quick double tap or a long press. The two buttons pressed simultaneously might also have been programmed to do something useful.

But they know nothing of these refinements. Again, a future firmware update may address this point. But we’re writing about the watch as delivered for review in the opening months of 2021.

This particular watch is an early not-for-sale review sample and seems to miss out on some of the functions found in later production versions. There’s no NFC (near field communication protocol), so no automated Bluetooth pairing and no at-a-touch payment system. The currently very topical SP02 measurement of your blood oxygen level has to be manually activated—I understand that in later production versions this feature can be set to continuous monitoring.

Even so, this is clearly a very capable device. Behind the fancy watch faces is a serious health monitoring system that we’ll be exploring further in part two. Although on the large size—around 48mm lug to lug—its titanium/ceramic construction leaves it lightweight at a little over 50gms.

The apps currently available for the phone all come direct from Huawei. However, in February of this year Huawei threw open the door to third party developers. Depending on their uptake we could see many more apps for the watch appearing later this year.

Anyone with experience of other smartwatches will be struck, as I was, by the extended life Huawai has managed to sustain from the 455mAh battery. Admittedly, in large part this is due to Huawei retaining control over the operating system and the limited number of apps that run on it. So the downside is that this in no way resembles an Android device. There is no large and expanding choice of apps and the punter simply has to play the hand as dealt.

I’m no athlete. But at my advanced age and during the present, still persistent lockdown, I try to take a daily, strenuous walk that lifts my heartrate. The GT2 Pro, with its continuous heartrate monitoring, together with that cheery transatlantic training coach (“Your aerobic training has reached phase two… Good job!”) is a valuable on-going incentive.

More about this—and of many of the other functions—will follow with our closer analysis in part 2.