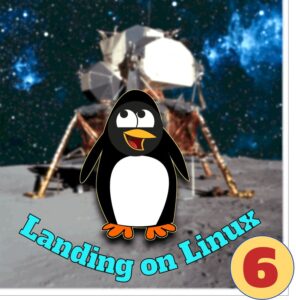 The Framework laptop is now assembled with an empty 500GB drive waiting for its first operating system. The Cunning Plan requires this to be Windows 10.

I shan’t be dwelling on this—after all, it’s Linux we’re here for—except to highlight a couple of things I’ve mentioned previously: Ventoy and WinSlap.

You can get a legal download of Windows 10 from here. Note that if you’re already running Windows, Microsoft’s cheesy security system will deny you this download and direct you instead to downloading the Windows “Media Creation Tool” which you’ll then use to access the actual download.

I didn’t want the Media Creation Tool. All I wanted was the Window 10 iso to add to the iso collection on my Ventoy USB stick. Ventoy + Windows 10 iso is recipe for instant booting, as we’ve discussed.

Happily, as I wasn’t using a browser on Windows, I could download the iso directly. Windows users, in fact, can do the same thing simply by tweaking their browser to announce, falsely, that it’s running on Linux. So Microsoft’s security system isn’t just cheesy, it’s Swiss cheesy.

*Ventoy can be set up to work around Secure Boot but it’s usually simpler just to turn off this feature in the BIOS.
The Ventoy USB stick with the Windows 10 iso didn’t boot at first. Then I remembered that I had set Ventoy up for another laptop that didn’t require Secure Boot. Investigating the Framework BIOSThe computer's Basic Input Output System, software permanently on the mainboard which is the very first routine to run at boot time.

Strictly speaking, today's computers use a different system, properly known as UEFI. But even hardened tecchies still call it the BIOS. I discovered it was expecting Secure Boot by default. Once I’d switched this off, the Framework welcomed Ventoy with open arms*.

With Windows 10 Pro installed on the Framework, I immediately ran Sven Mauch’s magnificent WinSlap. This gave me, with the minimum of effort, a Windows installation stripped of bloat and telemetry.

What it didn’t give me, alas, was the automatic addition of a number of trusted, useful free software applications—Gimp, DupeGuru, Audacity and others. WinSlap relies on a Windows app called winget to download these, and winget was missing from my Windows installation. It lurks in the Microsoft Store under the name of App Installer. But you can’t get it from there without signing in to a Microsoft account, which I wasn’t inclined to do.

Winget is downloadable from elsewhere, however. With this winget installed I ran Winslap again, just ticking calibre, Gimp and KDEConnect. (I’d already installed Telegram Messenger and DupeGuru manually—also the Vivaldi browser, which isn’t on WinSlap’s list but really should be.)

*It’s worth Windows users installing winget because it’s a very fast way of getting new free software onto your machine. For example, rather than have to hunt about with a browser looking for the site where I could download Joplin, my favourite note-taking system, just typing
winget install joplin
into the Windows command prompt gets the job done right away.

Would-be Linux users have an even better reason to explore winget as it’s a useful introduction to the command line method of installing and uninstalling Linux apps, as we shall see.

WinSlap was still unable to make use of my newly installed winget. But I found I could run winget  directly from the command line to download a few of the WinSlap apps*.

But for me, this Windows 10 installation is only transitory in the Cunning Plan.  For the Windows users among you, WinSlap does its main job of cleaning out Microsoft’s crud and cruft, although the downloading of free software apps may be something you have to do manually.

I was now ready to press on to Step Two. 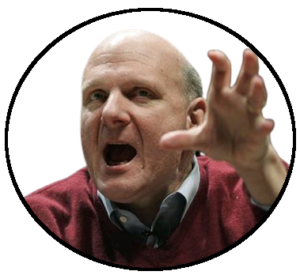 “Linux is a cancer that attaches itself in an intellectual property sense to everything it touches,” said the then Microsoft CEO Steve Ballmer in 2001. It was clear at the time that Ballmer’s legal and practical understanding of the issue was tenuous.

Linux was no threat to Microsoft on the desktop but Ballmer was seeing the rapid inroads it was making into the enterprise server market, which he thought Microsoft owned by right.

But now we have Windows Subsystem for Linux (WSL) as an official Windows download. I don’t know how this stupid name came about—the accurate description would be Linux Subsystem for Windows as Windows is the system and Linux is the subsystem.

Well, it’s some of Linux, at any rate. Follow the instructions for installing WSL here and you’ll discover what you actually get is a full implementation of Linux as a command line operating system only. There’s no graphical user interface.

For old Linux hands like me, command line Linux is the real Linux. But I can’t see the average Windows punter doing a lot with this. Perhaps that’s the idea. Hankering after Linux, are you, Microsoft asks. Well, here it is. Good luck with it.

However, if you’re so inclined, there’s a lot you can do and learn at the Linux command line. This isn’t the place for a tutorial (there are plenty on the Web like this one) but once you’ve installed WSL (I’d recommend starting with the Ubuntu 22.04 version) you can quickly pick up the basic vocabulary (for example, from here).

As a tiny sample of this new world, try this:

At the command line prompt, type the word top. You’ll see something like this:

These commands all derive from Unix and have two Unix characteristics. They’re always in lower case and they’re all terse. Back in the day you were working with line printers and/or monochrome terminals and any available memory was measured in kilobytes.

top stands for “Table of Processes” and that’s what you’re looking at here: a table showing all the processes running on the system at the moment. Not many have turned up because this is the Linux subsystem—you won’t see any Windows processes here.

Type Control-C to get back to the prompt. Now type the word btop. Something really classy happens.

The btop tool isn’t installed by default, as the response tells you. But it does say what you can do to install it! I love this. Don’t be intimidated by the dark waters of the command line. Helpful dolphins lurk below the waves.

*For our cousins across the Atlantic, the word is used here to mean “briefly, only for a moment”. The first time I heard the US variant was on a flight back from JFK: “We will be landing at Heathrow momentarily”.

sudo, by the way, is short for “supervisor, do <something>”. When you signed into WSL you were asked to create a user name and a password. Normally the user (I show up here as bidmead) operates at a security level that prevents access to things that can mess up the system like deleting files in the sensitive system directories or casually installing rogue apps.

sudo allows you to step from this mode momentarily* into the role of supervisor. You’ll be asked for your password before being allowed to proceed. If you want to stay as supervisor through a sustained session (absolutely not recommended until you know the operating system intimately) you can use sudo -i. This will require password validation just once until you end the session with Ctl-d.

If you follow the suggestion to install btop and run it you’ll get some idea of how programmers have developed the command line in the many decades since the era of line printers and mono terminals. 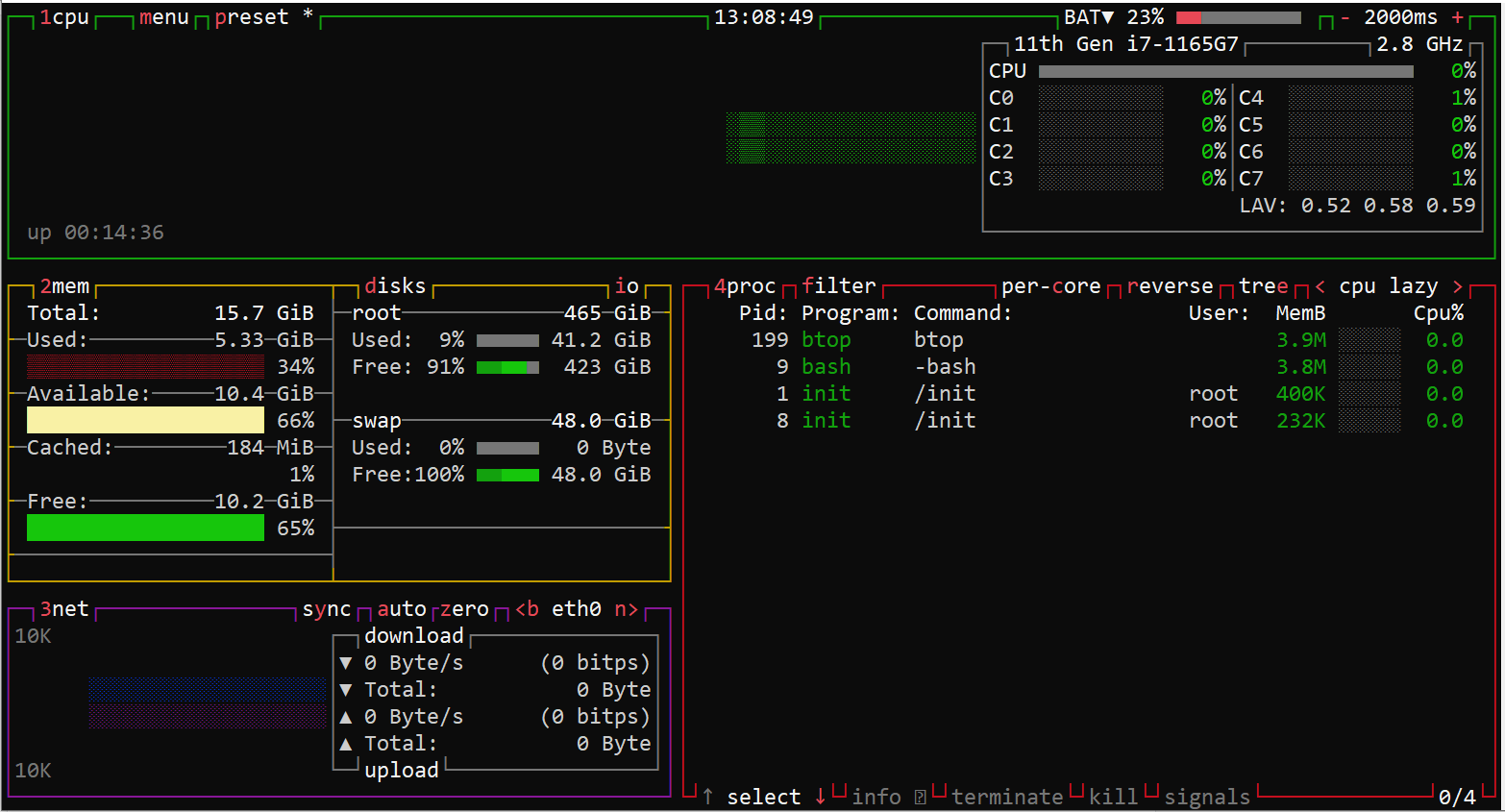 So far we’ve booted into Linux from a USB stick without affecting our existing operating system. We’ve also installed Microsoft-sanctified versions of Linux (but limited to the command line) into Windows itself, which gives us a good chance to master the underpinnings of Linux.

This is valuable, because one principle of Linux is that what the GUI shows of the operating system (as opposed to the apps running on it) is just a convenient handle on the real stuff that’s defined by human-readable text files below the surface.

In part 7 we’ll peel off Linux from Windows and—while still running it on the same hardware—get a complete Linux installation, GUI and all, working inside a virtual machine.A software construction inside a real machine’s operating environment that will support a different operating system