The DSP Programs I talked about last time are at the core of the RX-V679. This is where Yamaha’s expertise really shines. But to get to this functionality you need to go through the device’s user interface (UI). Weakness in this part of the design isn’t unique to Yamaha—it seems to be endemic across mid-range audio products. With that caveat, I promised earlier I’d say something about the RX-V679’s remote control. So here goes…

I’VE HINTED IN PREVIOUS EPISODES of this adventure that the human interface aspect of Yamaha’s design needs some attention.

The remote control’s a prime example. Something of a let-down, this. A 22x5cm elongated rectangle, 2cms at its deepest point where the compartment houses a pair of AAA batteries, this lightweight plastic device, with more than a touch of Poundland about it, sports no fewer than 66 buttons, most of them so small you’ll need an eagle eye and a Lilliputian finger to ensure you’re pressing the right one. It’s not illuminated, so using it in a darkened room is hit-and-miss for anything except Scene swapping, volume control and flicking through the DSP Programs, functions for which reasonably sized buttons are provided. 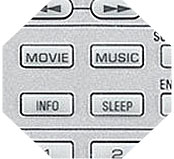 As well as the pair of large buttons provided to cycle through DSP Programs, there’s an additional pair nested among the tiny buttons that divides the DSP Programs into two types: one for those relating to music, and the second for movies.

And here comes another niggle: a useful convention that’s grown up around equipment over years of experience is that the first press on a button like this that’s going to change the state of a machine doesn’t change the state—it displays the current state. (Even my coffee grinder understands this simple principle.) So I’d expect the first press on either of these buttons to punch up the name of the current Sound Program either on the main unit’s built in LED display or the screen.

Here’s a scenario: You’re listening to a Beethoven string quartet and you think the DSP acoustic sounds a bit too spacious and might be better off placed in the Chamber preset acoustic. So you press the button marked “Music”, and the acoustic immediately switches to the Cellar Club. This will tell the seasoned RX-V679 owner that the DSP was already set to the Chamber preset (because “Chamber” precedes “Cellar Club” in the way the DSP Programs cycle round).

But now you’re in a Jazz club environment, and you have to press the tiny button seven more times to switch through The Roxy Theatre, The Bottom Line, 2 Channel Stereo, 7 Channel Stereo, Hall in Munich, Hall in Vienna before finally cycling back to Chamber.

Yes, there’s an Info button (also tiny) in the row below you’ll probably eventually learn to turn to first: this steps you one button press at a time through information about what’s currently playing, including the compression algorithm used, the title of the current song, the artist, the album and—finally—the DSP environment being applied.

This Info button information only appears on the main unit’s LED display and never on the screen. This may be because it can be punched up on the screen using other buttons (see below), but I’m left with a distinct impression of what Dieter Rams—father of modern design, the brains behind early Braun products and the hero of Apple’s Jony Ive—calls “the arbitrariness with which many things are produced and brought to market”. Not, as I say, that this is by any means unique to Yamaha. 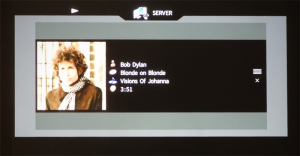 It’s possible to use the remote control while watching the unit’s built in LED front panel, but you’ll find navigation through the options and your media a lot easier in conjunction with the on-screen display that shows up on whatever display device you’ve attached to the HDMI out port.

This is the display we used when we set up the speakers, but it will also behave as an extension of/alternative to the LED front panel for handling media you’re playing through the RX-V679. For example, if you’re playing a music track which has been properly tagged, the track information you’d have patiently to step through to read off the LED front panel is all displayed here in a single table, alongside any album image associated with the track.

Pressing the remote control button marked On Screen brings up an overlay of information about the RX-V679 itself, sliding in a side panel to the left of screen you can scroll through to find out and change parameters like the DSP Program, Scene, Input currently in use. One such option, Setup, lets you revisit your speaker adjustments, as well as tweaking most of the machine’s other sound, video and network options.

The remote control’s On Screen button is mirrored by a button just marked Option on the right hand side that brings up a panel of audio and video adjustments for fine tuning features like the bass and treble levels. You might be want to use this for sharpening the audibility of dialogue in a movie’s muddy soundtrack (and as well as being able to boost the treble, there’s a separate function that attempts selectively to up the volume of dialogue coming through the middle speaker). Sadly, these changes aren’t tied to the current Scene. They’re global, which means you’ll have to reset them when you go back to playing music. 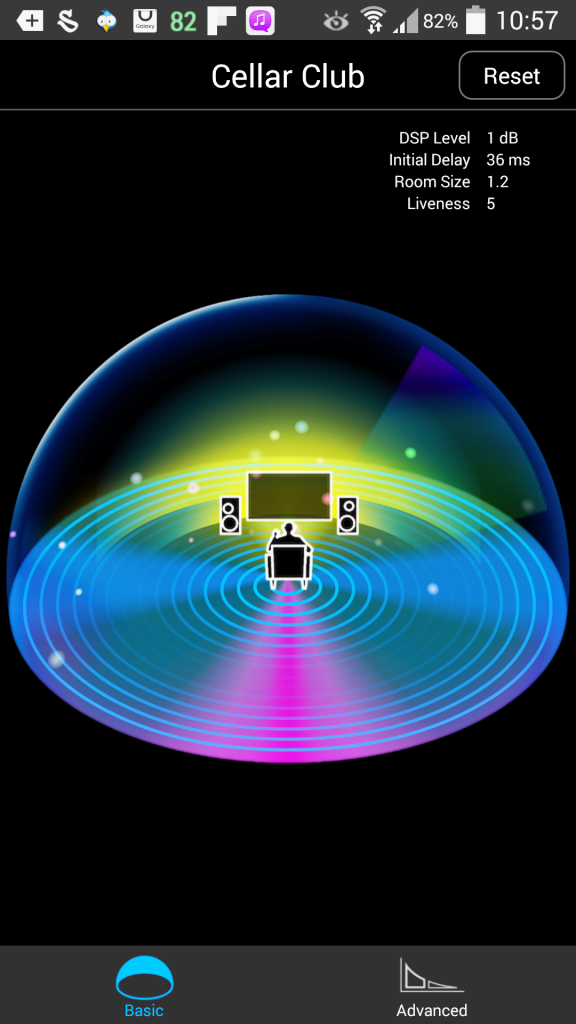 The Basic way of adjusting individual DSP Program settings on Android. The “listening dome” can be zoomed larger or smaller. An Advanced screen allows you to adjust the parameters individually.

If you want to avoid the remote control there are other ways of externally driving the RX-V679. Apps are available for iOS, Android and—laudably—Windows phones.

The Windows phone version is a simple text-based app that covers most of the basics you’ll need. The Android app (and, presumably, the iOS app—I didn’t test it) goes rather further into the capabilities of the AV receiver, for example by offering two different ways of modifying the DSP acoustics of each individual Sound Program (see picture).

As well as piloting the system from a phone or tablet app, you can access the RX-V679 from any computer on the same LAN simply by sticking its IP address into a Web browser. You can get this address from the on-screen Information/Network panel. (But watch out for the stupid trap Yamaha sets for you.) 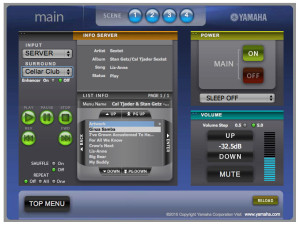 The Web browser offers a series of useful panels that look like this.

You’ll notice from the volume control panel bottom left that this can be adjusted either in 5dB or 0.5dB steps, which I thought was a particularly nice touch. Unfortunately, the Web interface seems not to remember this setting, always re-setting to the larger increment when you reload the page. Which is particularly odd, as the remote control and the unit’s physical volume control knob both operate in 0.5dB steps. The practical importance of this is that 5dB steps sound like distinct jumps in volume, whereas 0.5dB changes are smooth.

Using the RX-V679 to play music from a DLNA Server (more about this in the next and final episode) is straightforward, if perhaps a little too basic. Play a track and the system will continue to play subsequent tracks it finds. While a track is playing you can use the navigation buttons to wander through your collection looking for the next track without interrupting the current stream. But there’s no way of building and/or storing playlists, or even adding chosen tracks to the whatever’s playing at the present. 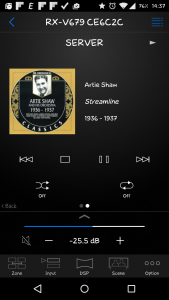 Track details and pause/play control but no playing progress shown on the Android app.

It would be useful if the Web interface showed progress through the track, but this feature is missing from both this presentation and the phone app. The On Screen presentation direct from the unit does manage to display track time expended in minutes and seconds, but without an indication of total track time you get no sense of position. (Some of those Lily Allen remixes just seem to go on for ever.)

Other panels presented to the browser give you control over a variety of other functions, like editing the machine’s name on the network, arranging it to switch on via the Web browser, updating the firmware and backing up all the unit’s settings.

To be fair, Yamaha’s designers have a much bigger problem than Dieter Rams faced in those early days of Braun radios. There’s a ton of extra functionality in modern AV receivers, and “surfacing” it (as the jargon goes) to the user is a real challenge.

The phone app meets this challenge much better than the remote control, and rather better than the Web interface. The only function inaccessible to the phone app (for some reason) is the ability to change the algorithm for the Surround DSP Program. The Web interface can’t do this either—if you want to switch the Decode Type between Neo:6 Cinema, Neo:6 Music or the 6 Dolby variants you can only do this through the on-screen menu.

One thing the Web and phone apps could do—but don’t—is give you extra Scene preset buttons. The four Scene buttons on the physical front panel are faithfully echoed in Yamaha’s software controllers. But if you want to add more of these preset Scenes (you will, you will) you can’t. I’m having to share the Scene 3 button between Internet Radio and playback from my NAS. These could very usefully be two separate Scene buttons, and software controllers easily make this possible. Yamaha’s app designers, however, have passed on this opportunity. 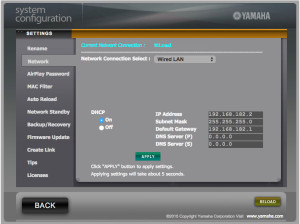 The Web interface has a Settings option. I’ve mentioned inattention to design detail as a recurring problem, and here’s another example (the “stupid trap” I mention above). When DHCP is set to ON, as here, the network details shown in the right hand panel may be completely wrong.

This is actually an edit box, only useable when DHCP is set to off, and in the screenshot you’ll see it’s displaying now obsolete data from last time it was configured. The box as a whole should either vanish when DHCP is on, or (better still) reflect the real current data. (Yamaha, if you’re reading this—this is exactly what Dieter Rams means by “arbitrariness”.)

A prominent feature omitted from the RX-V679 is DAB (Digital Audio Broadcasting). I was a huge fan of DAB when it first appeared in the second half of the 1990s. In the very early days of DAB radio I had an Arcam Alpha 10, a tuner-only unit which in late ‘90s money cost around twice the price of the RX-V679. But the only music you could get out of it during that initial test phase was the cheerful chirrup of birdsong running in a loop. If I remember correctly the birdsong was broadcast at 256kbps, totally fulfilling DAB’s promise of crystal clarity.

Alas, Radio 3 began its DAB broadcasts at a rather tight 192kbps, and still does today (and for a lot of the time it’s even only 160kbps). If you’re thinking in terms of MP3s, bear in mind that DAB in the UK employs the looser MP2 compression, which needs more bandwidth to achieve the same quality. So 196kbps DAB isn’t much better than 128kbps MP3.

Yes, it’s still “crystal clear”, in the sense that it’s free of FM-type transmission interference, but compression artifacts muddy up orchestral music enough to send me back to FM—and now Internet radio. You’ll find an older DAB-enabled AV receiver in Yamaha’s back catalogue, but it’s a feature I’m very happy to pass up. The RX-V679’s FM signal here in North London is interference free and I get clear and consistent reception from my roof aerial.

We’re nearly done with the RX-V679 adventure. Next time I’ll be winding up by talking about Bluetooth and Airplay, and I’ll finally get round to DLNA.