Fair warning: this is not going to be a regular Tested Technology review. It’s the result of a weekend flirtation with the product, under the supervision—admittedly pleasantly loose—of Acer’s own PR team.

Acer organised a trip to Glasgow for a small gaggle of journalists and bloggers to experience the (surprisingly many) gastronomic delights of that city. Included was a visit to the Auchentoshan single malt whisky distillery, involving (full disclosure) some extensive product sampling.

Thus bribed to the hilt (but sadly not to the extent of being allowed to retain the Swift 7 after the review) and in a mellow mood, I set about writing what you will read below. 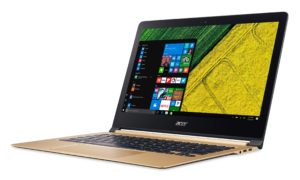 THE ACER SWIFT 7 (NO RELATION AT ALL to the Wileyfox Swift range of smartphones) is an hyperbolically elegant, super-thin, super-light, metal-clad laptop in matt black with gold trimming.

Acer claims it’s the lightest laptop ever made.

Opening the clamshell reveals an all gold deck embedded with black keys that would not look out of place in Donald Trump’s office. The full Gorilla glass protected HD IPS LED backlit screen offers rich colours, and although falling short of the higher resolution we may have come to expect in a notebook of this quality, displays text with admirable clarity. I certainly didn’t miss the extra pixels.

One disappointment, though, is the display size. A sister product, The Acer Spin 7, manages to take the screen almost to the left and right edges of the lid, and the rival from Dell, the XPS series, minimises the bezel all round.

The Swift 7 and the Spin 7 are very similar, the main differences being that the Spin’s screen responds to touch and the hinges allow it to be wrapped right back through 360° so the device can be used as a tablet. A subtler difference is this boast of the Spin 7’s to—as Acer puts it—contain a 14″ screen in a 13″ form factor.

It’s a shame the Swift 7 can’t do that. The chunky black bezel all round it shows hardly any advance on laptops of half a decade ago. I accept that many other super-light notebooks are in the same boat (including the design leader, the MacBook). But Dell has demonstrated conclusively that the screen can fill the whole lid of a clamshell notebook, and once you’ve seen that you can’t unsee it.

Above the screen is a 720p Web cam. Some users might be disappointed that Acer hasn’t gone full HD here. But frankly for most use cases (and particularly for Web cams) I’ve always been of the “720 is Plenty” persuasion.

The Swift 7 is built around an Intel i5 processor. This is the latest 7th generation “Kaby Lake-Y”, launched onto the market in September of this year (2016) with 4MB of cache and two cores each capable of handling two simultaneous threads.

Nominally running at a clock speed of 1.2 GHz, the 14nm architecture helps keep the average power consumption down below 4.5 Watts. To put this in perspective, this is well under half the power of the previous generation of notebooks, allowing the machine to be completely fanless and giving it a battery life of a claimed (up to) 9 hours. I didn’t have the opportunity to test this duration, but I expect we’ll all want to take this with the usual pinch or two of salt. I notice that other reviewers have measured this as under six hours for intensive video use, which still seems reasonable to me.

According to the Acer literature these speakers are able automatically to reverse audio channel output based on the screen orientation. If you’re wondering why an accelerometer is included in the specs; presumably this is the reason. Oh, but how often do you find yourself watching a movie on your laptop upside down? I could see this feature being useful in the Swift 7’s sister product, the Spin 7, where the 360º hinges allow movie viewing in “tent mode”.
The speakers employ “TrueHarmony™ Technology”, which claims to offer “more accurate sound reproduction and fuller-bodied” audio. I’ve absolutely no idea what this reassuring brochure-purring means in practice, but I can report that the two small stereo speakers built into bottom of the Swift 7 produce a sound that is pleasantly spatial, if somewhat muted.

I found that the positioning of these speakers in the base can make it especially difficult to follow the dialogue of a movie. The top frequencies are likely to get buried, particularly if, say, you’re sitting up in bed in a Glasgow hotel with the Swift 7’s TrueHarmony™ Technology downfiring into the duvet.

In this kind of scenario the 3.5mm headset jack comes in very handy.

But it would be unfair not to acknowledge that the lightness and thinness of the device obviously forces a trade-off here. I’m really having a pop at the brochure writers, not the product itself. If you insist on the full orchestra, you can always hook the Swift 7 up to a couple of Bluetooth loudspeakers.

The main conduit for data in and out of any machine like this is bound to be the wireless connection. The Swift 7 seems to have got this right. If you have an access point that supports 802.11ac and MU-MIMO, Acer claims you’ll get (up to) three times the data transfer rate of a regular wireless N connection.

(I’ll have to take that claim on trust, as the wireless connection in the otherwise luxurious Glasgow hotel room where I was testing this had the consistency of treacle for much of the time.)

You may feel the news on secondary data conduits is less rosy. There are none of the conventional USB 2 or USB 3 ports. All you get (aside from that welcome old friend, the 3.5mm audio socket) are a pair of seemingly identical USB C receptors.

I say “seemingly identical” because although they have the same physical appearance only one of them can be used for connecting to an external display. This highlights a problem with the new, and mostly welcome, USB C standard. It’s huge, loose and open to multiple different interpretations. Connectors and sockets that look identical can support quite different functions, and the same applies to the cables.

Acer tries to help out here by adding tiny logos beside the pair of ports. It would be useful if these almost invisible clues were at least standardised across different devices and manufacturers. But they aren’t.

The confusion about these two ports wasn’t mine alone. The Acer team in Glasgow initially told me that only one of the two ports could be used for charging. The published specs disagree: either of these will accept the 24V DC input from the power brick.

Acer does offer some extra connectivity by bundling a couple of USB C adapters: one goes to a USB 3 A-type socket and the other to HDMI. Photographers used to plugging SD cards directly into their laptops will need to lash out for a third adapter, as the Swift 7 hasn’t managed to squeeze in space for an SD card slot.

I’m writing this using the Swift 7 now, and as a physical device I’m finding it a joy to use. Although the chiclet keys have a very short travel and are a little on the small side, they’re positive and responsive in action. There’s a slight flex to the keyboard under your fingers, but it’s nothing objectionable. I particularly liked the extra-wide touchpad that allows two-finger scrolling.

I’ve just one other carp to add to the gripes above. Backlighting the keyboard, something that’s become a standard for this class of machine, has been abandoned in the quest for thinness. A less skinny version of this same machine, with room for backlighting and a more substantial battery would certainly get my vote. 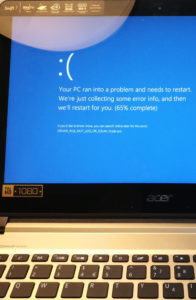 Of course it goes without saying that despite the very evident borrowing of Cupertino’s design language, you’re going to be stuck with Windows 10 for your operating system✱. Many of you, I understand, have become inured to it, and some even like it. I’m not a fan.

Particularly, when, in the middle of writing this, the operating system thinks it appropriate, in mid-sentence, to pop up a warning that “Your PC ran into a problem and needs to restart.”

The “problem” turned out to be that Windows wasn’t up-to-the-minute up-to-date, and the system instantly began to remedy this. Without asking my permission or even apologising, the machine rebooted and began a lengthy download of the update.

It’s my understanding that Windows 10 users have had to adjust to this as a regular occurrence. If you feel you can live with this pre-emptive behaviour (along with the many other infelicities of this now ancient operating system), the beautifully designed and manufactured superslim Swift 7 may be the next notebook you’re looking for.

✱ There’s a fix for this, however. Brad Linder at Liliputing has demonstrated that the Swift 7 runs Ubuntu Linux very nicely, with all the features like audio, video and wireless working properly.