I’m about to contradict myself.

This is an interesting experiment for me and one I hope you’ll feel the same way about.

In our earlier review of the Synology entry level DS119j I wrote confidently:

The single drive isn’t technically a limitation on capacity—the DS119j’s specs allow for a drive as large as Toshiba’s magnificent helium-sealed MG07ACA14TE. Yes, that’s 14TB. But even if you can stump up the necessary £550, this is not an upgrade any storage guru is likely to recommend for this particular device. You’d need at least a two-drive array to ensure your data was safe.

Now I’m going to have to eat my words… 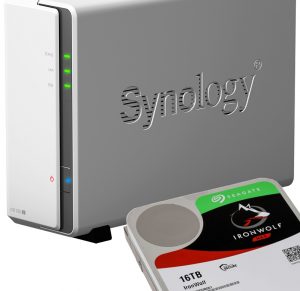 IN THE NORMAL WAY OF THINGS, our upcoming review of Synology’s DS-120j would strike a note of déjà vu among regular Tested Technology viewers. It would be a write-up of a NAS so similar to Synology’s previous entry-level DS119j that the differences could be described in a couple of paragraphs.

It has twice the memory (still not much by modern standards, just half a gigabyte) and the maximum drive capacity goes up from 14TB to 16TB.

Except that I had a rather wicked idea.

I was inspired by the fact that, unlike that earlier DS119j, which came with a 4TB hard drive provided by Seagate, Synology was supplying us with the DS120j as an enclosure only.

No hard drive. To bring it to life I’d have either to dip into the publication’s very petty indeed petty cash or seek a donation from a drive manufacturer.

Western Digital has already been outstandingly generous to Tested Technology, so on this occasion I thought I’d give them a break and turn to their main competitor, Seagate. For the past year or so, Seagate has been fiercely contesting Western Digital’s dominance of the NAS market, pitching its own Iron Wolf series of 24/7 drives against WD’s well entrenched Red series.

Seagate’s aggressive Iron Wolf invasion has been so successful that the company has managed actually to install itself inside Synology’s operating system.

Storage Manager, one of Synology’s standard system apps, includes a tab that will run and deliver information on SMART, the health reporting system universally found on modern hard drives. 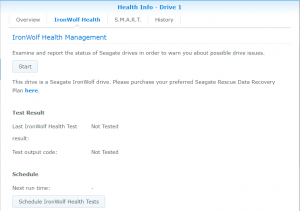 This Iron Wolf tab only appears when a Seagate Iron Wolf drive is installed.

But if an Iron Wolf drive is installed, a separate tab, dedicated to that specific brand, appears. Here you can run Seagate’s own Iron Wolf Health Management (IHM) diagnostics, giving a much fuller picture of the health of the drive.

The warnings given by SMART are intended to alert you to incipient drive failure far enough in advance for you to be able to save your data. Introduced in the mid ’90s, this Self-Monitoring, Analysis and Reporting Technology has not convincingly fulfilled this goal. SMART-enabled drives can still fail suddenly, without warning.

But not, says Seagate, Iron Wolf drives—if monitored by its diagnostic software.

I thought it might be fun (as well as technically interesting) to re-examine my caveat that a very large drive in a single drive NAS “is not an upgrade any storage guru is likely to recommend”.

All that data. On one hard drive. As they’re fond of telling you in TKMaxx, when it’s gone, it’s gone.

But I’d found myself wondering if I and my hypothetical storage guru were actually right about this.

The Case for Mr Big

Although very costly, today’s mammoth hard drives offer a very decent price per gigabyte. Instinctively you might think, yes, OK, but these drives belong in a proper RAID array, where the precious contents are cossetted by parity checks and redundancy.

For the purpose of this thought experiment, put aside the fact that in this case we’re dealing with a single drive NAS. Let’s allow ourselves a notional multidrive NAS in which we can build whatever array seems optimal.

*on a two- or four-drive RAID system. I’m grateful to my IT journalist colleague Manek Dubash for reminding me that in a 6-drive array, RAID 6 will only lose a third of the space to parity and redundancy.

It becomes clear that there are a couple of things wrong with this picture. Parity checks and redundancy will halve the physical volume* and so double the storage price, tossing away that big drive bonus. And parity checks and redundancy will only pay off when a drive in the RAID array fails. Do you have any idea how long it would take to rebuild the data in a RAID 6 array of 14TB drives when—as it inevitably will—one of those drives fails?

The only practical metric I have on this is Tested Technology’s own 4-drive QNAP NAS. When one of its WD Red’s conked out last year, reinstalling the replacement was only a matter of minutes. But rebuilding the data across the array took almost exactly 24 hours.

And that was only a 6TB drive.

On this basis, I could see an argument to be made that, in fact, a single drive NAS would be the preferred environment for one of today’s monstrously huge hard drives.

Particularly if Seagate’s Iron Wolf promise is to be trusted. Given sufficient warning, there would be plenty of time to transfer the data from a failing drive onto a new one.

If my new hypotheses about this are right, a single drive NAS becomes a very sensible way to house a monster drive. Unless I was right the first time.

Seagate to the Rescue

Seagate’s Iron Wolf drives have a 3-year warranty. Within that period you could reasonably expect Seagate to replace any failed drive free of charge. By the time this warranty runs out, the price of these should have dropped considerably.

I winged off an email to Seagate, expecting that any positive response would initially offer the same sort of modest capacity as the 4TB drive donated with the DS119j. I’d carefully prepared my argument for pushing the capacity up to something more interesting.

But I needn’t have bothered. Seagate came straight back with a proposal to send Tested Technology their latest Iron Wolf. At 16TB it happens to match the maximum capacity of the DS120j.

Wait… Is that 16 Terabytes?

Yes, it’s 16TB. A single disk that is larger than the working capacity of my largest 4-drive NAS

So that, with huge thanks to Seagate, is what we’ll be testing.

While you wait for our full DS120j write-up, most of the details in our two-part DS119j review will be relevant to the new version.