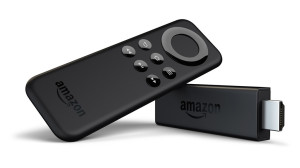 I’ve never fancied the idea of the “SmartTV”. TV manufacturers are clearly desperate to keep up sales in a near-saturated market, which largely explains the promotion of gimmicks like 3D (widely regarded as a failure) and now 4K (welcome perhaps on 60″ screens, but below that… really?).

Piling on the electronics to provide an operating system that supports apps and special channels is another way to persuade you that the set you bought the year before last is already old hat. The truth is that a decent screen should have a technology lifetime of at least 5 years. But the electronics—the “Smart” part of the TV—is evolving faster than your phone. That side of things shouldn’t be hardwired in, it should be disposable. A set-top box is fine, but better still are these new little low cost gizmos not much bigger than a USB drive that plug directly into your TV’s HDMI port.

Which brings us to the Amazon Fire TV Stick. This is certainly one of the more powerful devices in its class, boasting a dual core ARM processor, 1GB of memory and 8GB of flash storage, making it on paper by far the most powerful HDMI stick in its class. But what counts is what you can do with it.

You might see this as another typical Amazon device, designed to lock you into the company’s ecosystem. Which it is. Until, magically, it isn’t. Read on—all will be revealed…

The Amazon Fire TV Stick is the younger sibling of the Amazon Fire TV, a larger, more capable set-top box that arrived in the UK last year. The much smaller Stick launched in the UK in April for around half the price has most of the main couch potato functions, but with only half the memory and a dual core rather than a quad core processor, can’t handle high performance games. The Stick is also wireless only, with no wired Ethernet capability.

The raison d’etre of the Stick—and probably the motive behind its remarkably low price of £35—is to suck you into Amazon Prime Instant Video. It comes with three months free subscription to give you a taster, and if you bite you have the option of going for the full Amazon Prime service at £79 per annum, or the limited Instant Video only service at £5.99 per month. Some quick maths will tell you you’d only be paying about 60 pence per month extra for the full schmeer, which includes “unlimited one-day delivery” on most of the items Amazon sells.

At the launch party Amazon held at its UK premises in London’s Holborn there were demos of the Stick working with various LG TV sets around the room. The interface is slick and fast, and one of the neatest features is the voice recognition search. Unlike the full Amazon Fire TV, the Stick doesn’t come with a remote control that accepts voice input, but Amazon points out that you can optionally add a voice-capable remote control for another £25. (This hardly makes economic sense as it brings the price of the Stick up to £60, and the full Fire TV Box, launched last year at £80 is currently on offer for £64). As a happy alternative, there’s also a free app to turn your Android, iOS or Windows phone into a Fire Stick voice search remote control.

I asked the Amazon product manager if the Fire Stick would be capable of running my own stock of videos from my local area network: she thought not. So it seemed at first that delivering Prime Instant Video was most of what the Stick was about. A bunch of other apps are on hand, either already installed or quickly and easily downloadable from the official Amazon Fire Stick Appstore. These include the usual suspects: a decent implementation of the BBC iPlayer, BBC Sport, Sky News, YouTube and radio channels like Spotify and TuneIn. It was a pleasant surprise to find Amazon Prime Instant Video’s main rival Netflix there too.

But best of all was the discovery, contrary to what the product manager had told me, that Plex is also on hand.  Plex is a streaming client/server app that handles videos, music and photos from your local area network, garnishing them with pictorial and textual metadata automatically downloaded from the Internet and deftly organising them into categories. I began to see for the Stick wider possibilities beyond the walled garden of Amazon’s ecosystem.

But this was only the beginning.

The Possibility of Kodi

One of the first things I discovered on getting the Fire TV Stick home (full disclosure: the Stick was a press freebie) is that—unlike the Roku Streaming Stick I’ve been using here for nearly a year now—Amazon’s device is essentially a straightforward Android box. Meaning that you should be able to sideload standard Android apps, as long as they don’t depend on any of the extra services that Google adds to Android phones and which Amazon entirely excludes.

Which opens up the possibility of Kodi. And Kodi, in turn, opens up the Amazon Fire TV Stick—quite literally—to the whole world.

Until last year Kodi was known to the geek community as XBMC, a bunch of initials that hint at its origins as the XBox Media Centre some time around the beginning of the century. It’s broadened its horizons since then, and now runs as a Plex-like app—although, unlike Plex, completely open-source and free—on practically every platform under the sun. It differs from Plex in another way too: it’s capable of collecting from the Internet not just metadata, but whole movies and live TV streams. If it’s out there on the Internet somewhere, Kodi can probably find it and deliver it up to your TV screen. I make no comment here about the legality or otherwise of what you might do with it, and this isn’t the place for a full description of how to install Kodi on the Amazon Fire TV Stick. But it’s pretty easy if you’re of only a slightly geeky turn of mind, and full instructions are only a google away.

Kodi and its Third Party Addons.

There’s been some misunderstanding about this, so I’m adding this link to my later review of the Amazon Fire TV Box, where I discuss this more fully.

As the Stick itself will be hidden behind your TV set, the physical presence of all this wonderfulness just boils down to the small remote control that comes in the box. The remote control runs on a pair of AAA batteries and fits nicely in the hand. The cursor navigation ring with its large central action button lie within comfortable reach of your thumb, as do the six clearly marked function buttons below it.

My one complaint about the remote control is that the buttons are subject to “bounce”, which can produce, for example, double letters when trying to enter a password. In an extreme case I encountered more than once, pressing the navigation ring to jump to the next item in a list can suddenly set you scrolling rapidly through the whole list, as if the key had become stuck down.

Also in the box with the remote control is a USB power supply and cable, offered in case your TV has no USB outlet. Or—Amazon warns—has an outlet with insufficient wattage to drive the Stick properly. Actually, this brings me to perhaps the one real qualm I have about the product. I haven’t been able to find the wattage requirement stated anywhere in the specs and the somewhat chunky power adapter Amazon supplies in the bundle has no ratings on it, but with its quad core processor this little beast runs hot, even in standby mode. I’d really like to know how much juice it’s using, even when it’s not entertaining me.

These wee quibbles apart, this is fine product.  Yes, the Amazon Fire Stick looks at first glance like a walled garden. But in practice you can pull the walls down with your bare hands and wander out into the jungle at your leisure. So at a near-disposable £35 price it’s a steal.

P.S. A last-minute system update has introduced Amazon’s new X-Ray feature. This lets you interrogate a movie at any point to investigate features like the cast details or the music playing.

I’d rather hoped it would work like the music id app Shazam, which listens to what you’re playing from any source, derives a “fingerprint” from what it hears and then delivers details from an independent database. An X-Ray feature built like this would work with whatever the Amazon Fire Stick was playing, whether sourced from Amazon, elsewhere on your LAN or the Internet (from Netflix, for example).  But unfortunately it seems to rely on a special “fingerprint” built into the source to access its data, and so only works with what Amazon Prime supplies directly. And not always then. A British sitcom like the excellent “Doc Martin”, although offered on Amazon Prime, doesn’t respond to X-Ray.