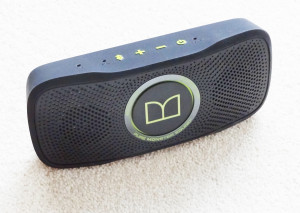 The Monster Superstar Backfloat is promoted as rugged and waterproof. It is, but the key thing for me – it sounds really good.

THERE REALLY ISN’T a lot you can say about Bluetooth speakers. They’re either good or bad. In my experience they’re mostly bad.

There’ve been one or two exceptions: Three years ago I was impressed by the little Damson Twist, a tiny £50 pocketable device that sounded tinny and insubstantial on the palm of your hand but which sprang richly to life when you put it down on a resonating surface it could use for its bass frequencies. The series of HDMX Jam speakers that arrived some months later from Homedics also punched well above their weight, independently of where you put them.

But as Dr Samuel Johnson once said of a dog taught to walk on its hind legs (in a somewhat sexist context we’ll ignore here) “It is not done well; but you are surprised to find it done at all.”

That’s a summary of my experience of Bluetooth speakers. Until this morning. In the prestigious offices of PR company DeVries SLAM’s Holborn headquarters I met the Monster Superstar Backfloat. The name (and the small size of the box) suggested this would be yet another dog – possibly, if we were lucky, staggering upright.

I was wrong. This little matt black speaker manages to magic a wholly convincing stereo sound-field out of a form factor measuring only 12 by 5 by 18 cms and weighing just under 200 gms. I’ve been sitting here this afternoon listening to Jaap ter Linden’s 1997 recording of Bach’s Cello Suites, and the thing sounds – like a cello! I’ve moved on now to the one-time Weather Report bass player Jaco Pastorius (he’s playing Birdland as I write this) and those deep, rich notes are all there. Not just as vague thumps. Real music.

OK, I’m not saying we’re close to what my 200 watt Harman Kardon subwoofer can deliver. But if you had to pack a carefully tuned 5.1 sound system into something you could slip into a jacket pocket, this is the way to do it.

It helps that the Backfloat is using the latest AAC and aptX codecs for the Bluetooth connection. The Bluetooth standard codec, SBC, received a lot of bad press in the early days. Actually SBC, which of course the Backfloat handles as fallback if the sending device lacks the newer codecs, functions quite acceptably within the bandwidth of today’s Bluetooth, but AAC, and particularly aptX, if your sending device uses them, should give you respectively near-CD and CD or better performance.

But I haven’t yet touched on what the Monster folks regard as the chief USP (they seem to take the superb sound as a given). This thing is waterproof, and pretty well indestructible. And it floats! During this morning’s demo it got chucked on the floor several times and dunked into a kiddy pool with the vibrating silicone-protected speaker cones sending up sprays of water. And went on playing.

As well as Bluetooth you can feed input through a standard 3.5mm stereo port or a microUSB socket (also used for charging), both of which are concealed behind a waterproof rubber flap on the right hand side. On/off, volume control and pairing functions are represented by a set of four rubberised buttons on top, flanked by red and blue LEDs that indicate respectively power on and Bluetooth connected.

There’s also a built-in (and waterproof) mic on the top surface, so you can use the loudspeaker in conjunction with your phone for conference calls.

The curved front panel comprises a pair of left and right round speakers visible through a stylish perforated grille. Between them, taking care of the lower frequencies, is a vibrating flat circular panel decorated with the Monster logo. Official playing time on a single charge is 8 hours. An acoustically transparent mesh carrying case is provided in the box for extra protection on the go.

The official price is a hair under £130 but you can save a few bob if you shop around. Mine came in the press goody bag Monster provided after the event.  I tell you this in the interest of full disclosure, but you should know that the contents of many a goody bag have failed to make it to these pages over the years. And I don’t remember ever being inspired, as I have been on this occasion, to sit right down and share my enthusiasm on so short acquaintance with a new product.

Love at first sight? Frankly I’m still not sure quite where small Bluetooth speakers fit into my life. In the living room there’s the full 5.1 surround sound system, and music in the world outside for me mostly means headphones or earbuds. Music in the garden would be headphones too – mine’s a quiet, civilised neighbourhood.

But next time I travel abroad the infelicitously named Monster Superstar™ Backfloat™ is definitely going to be in my luggage. And until then this thing will have a firm place as my intimate companion in the bath and the shower.