Why has it taken me so long to put together this review of BenQ’s sub-£800 projector?  It’s been on the go here at Bidmead Towers since before Christmas. Could it be that I’ve been enjoying it so much I’m reluctant to return this review sample to the manufacturer? Perhaps. My official reason is that its excellence (for a remarkably low price) is subtle. Not easy to put into words. And I want to do it justice. 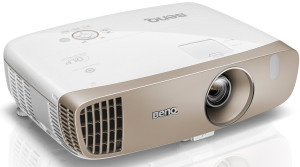 THE PROBLEM, IN A NUTSHELL, is that the W2000 isn’t bursting with unique, easily definable features. Unlike, say, the Optoma HD28DSE with its DARBEE video processing. In fact, in a sense, this BenQ projector is the exact opposite. Instead of trying to improve the picture, it does its utmost to render the original as faithfully as possible.

And its general specifications don’t top the charts either. Like most projectors in this price range it’s built around a single DLP chip, illuminated by an ultra high pressure (UHP) mercury vapour lamp. Its quoted brightness, at 2,000 ANSI lumens, is adequate but not newsworthy. The 15000:1 contrast ratio (insofar as these manufacturer-quoted contrast ratios mean anything at all) sounds good, but black levels in low-light scenes can still sometimes appear washed-out and lacking in detail.

So what’s so special about this projector? I’ll come to that, but first let’s just get it going. 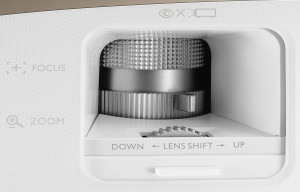 The sleek white and silver 380.5 x 121.7 x 277mm body weighs just 3.6kg, which means it won’t need permanent installation—this is a projector you can optionally just plonk down on the coffee table and run. The device has its own built-in stereo speakers, but for movie watching you’ll probably want to hook it up to an external sound system.

Focus and zoom are controlled by a pair of thumbwheels accessible through a sliding panel on top of the lens housing. Levelling the picture is simple: a drop-down front foot to take care of elevation and a pair of screw feet at the rear for horizontal adjustment. Some useful but limited vertical lens shift (10%) is available through a horizontal thumbwheel inside the lens housing cover.

The throw ratio varies between 1:1.15 and 1:1.5 depending on the setting of the 1.3:1 zoom. If like me you’re struggling with the maths, this roughly translates into a 100″ diagonal picture when the projector is about 8ft away from the screen.

At the rear of the projector are a pair of HDMI sockets, one of them MHL-compatible. A 15-pin D-Sub connection labelled “PC” doubles as RGB and component video input, and component video can also be fed in through a set of three RCA sockets.  A second set of three RCA sockets accepts composite video and left and right analogue stereo input.  A pair of 3.5mm jack plug sockets can also deliver and receive stereo audio. There are two USB sockets (Type A, a 1.5 amp power supply and Type mini-B for servicing). A 12v trigger socket optionally to control external devices like a drop down screen completes the picture.

There’s a control panel set into the rear of the projector’s top surface, but you’re most likely to drive the machine from the infrared remote control. BenQ scores over rivals here: all the remote control keys glow red when you hit any one of them, a feature usually reserved for higher priced devices.

The W2000 provides just four main viewing modes: Bright, Vivid, Game and Cinema (Rec 709). The difference between these (for example the luminosity of “Bright” compared with “Cinema”) is less emphatic than other projectors I’ve reviewed, probably because of the use of an RGBRGB colour wheel rather than the now ubiquitous RGBCYM or its BrilliantColor variants. Each of these modes can be tuned by the user for factors like brightness, contrast, colour temperature.

If you do decide to tune the settings, the results can be stored in two User settings that are preserved when you turn the projector off.

Lamp power is switchable through Normal, Eco and SmartEco. Eco mode should be familiar to all projector users—it simply runs the lamp at slightly lower rating to save around 20% of the power, buying you much longer lamp life at the cost of a barely noticeable lumen loss. BenQ’s SmartEco is a lot more ambitious, claiming to be able to tune the lamp power in real time to the content being displayed.

This is somewhat equivalent to the “dynamic iris” arrangement widely used in 3LCD projectors to boost the (claimed) contrast ratio by mechanically limiting the illumination when projecting darker scenes. The main difference, of course, is that opening and closing an iris won’t have any effect on the power consumption. BenQ says that its SmartEco system can save up to 70% of the power, depending on the content being displayed.

Needless to say, the W2000 is also equipped to display 3D movies. Thanks to the very speedy refresh rate of DLP chips and the built-in ability to sync optically through the screen display itself with the simple and cheap electronics in DLP-Link glasses (removing the need for an IR or wireless side channel), virtually all projectors of this class can do convincing 3D these days.

However, if 3D is your passion (really?) this probably isn’t the projector for you. The key ingredient of 3D is light. Because of the loss of light through the LCD glasses, 3D needs lots of the stuff. The W2000 will certainly give a solid enough performance (hah!) judging by the half a 3D movie I’ve watched with the W2000 so far, so should be fine for the occasional adventure into 3D. (No, I don’t mean the left half or the right half, I mean I stopped halfway, having had my fill).  But 3D addicts are definitely going find themselves pining for more lumens.

BrilliantColor can give you a livelier picture, with a wider colour gamut and more brightness, as Texas Instrument’s marketing material suggests. But as usually implemented this “free lunch” is something of a cheat. The extra three paler yellow, cyan and magenta filters added to the colour wheel obviously increase the screen brightness, because they each let twice as many photons through than the primary red, green and blue filters.

Manufacturers seem keen to include these additional photon-friendly filters, if only because it allows them to quote higher brightness figures. But this “white brightness” is bought at the expense of what experts call “colour brightness”, the range of intensity that’s delivered by using only the three primary colours.

If only it were possible to have the best of both worlds: the extended gamut of BrilliantColor together with the colour fidelity of a primary-only colour wheel. In fact, as I explain in the body text, this is exactly what the W2000 does.

Good. Oh, but what’s this in the specification small-print? The word “BrilliantColor™” How can this be?

Let’s get inside the machine to find out.

The beam of light streaming through the spinning colour wheel is continuous. But the colour overlays being thrown up on the screen happen in discrete time intervals with blanking periods in between. Each colour flash is synced to the positioning of the colour segments of the wheel.

The blanking period in between each flash is achieved by momentarily setting all the mirrors on the DLP to the black position, the whole light-beam being dumped into the light-sink.

But what does this dumped light beam look like? With a pure primary colour wheel, which we can assume will be sequenced Red-Green-Blue, the first dump will be a mixture of red and green. When you add these colours (as opposed to mixing two colours of paint, which subtracts the colours), you get yellow. Similarly, the green-blue junction adds up to cyan, and the blue-red mixture gives you magenta.

So if you’re able to time it carefully (and modern fast processors make this possible), the secondary colours are already available in your RGB colour wheel. Instead of dumping them into the light-sink you beam them onto the screen, having earlier in the processing chain split out appropriate yellow, cyan and magenta images from the full-colour original frame.

That’s how the W2000 does BrilliantColor™.

Of course this version of BrilliantColor doesn’t magically pass any more photons through the filters. You are, however, getting more photons onto the screen because you’re using the light coming through these transition sections of the wheel rather than dumping it. This extra brightness slightly widens the colour gamut (although not nearly as much as the addition of physical secondary filters) without compromising the colour brightness. And now that the colour engine has secondary colours as well as primary colours to tweak, it’s possible to attain a much more precise colour rendering. 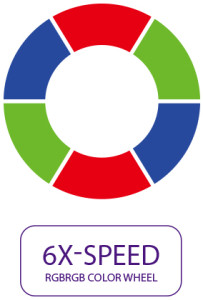 BenQ uses this extra precision to tune the projector to the colour specifications that form part of the industry standard “ITU-R Recommendation BT.709”, or Rec.709 for short. BenQ’s marketeers say this results in “stunningly true colours and a superb viewing experience.” The use of BrilliantColour can be switched on or off, but I found that leaving it on improved the “punch” of the picture, perhaps at a slight expense of the black levels.

Without calibration equipment I can only subjectively vouch for the hue-truth factor. And the real truth is that with the industry now in the early stages of adopting a new “High Dynamic Range” colour standard called Rec. 2020, hue-truth is a moving goalpost.

We’ve seen a fair number of entry-level DLP projectors here at Tested Technology with street prices between £400 and £1000, and so far there hasn’t been a bad one among them. The core technology belongs to Texas Instruments, and in the nearly twenty years since it first came to market I’ve been watching prices tumble and the quality soar.

But there are significant differences between manufacturers in the implementation of the DLP technology. The very best choice is to use three DLP devices, one for each primary colour. This is how they do it in the commercial cinemas. But it’s costly—you’re not just tripling the component price, but also having to solve the expensive manufacturing problem of absolutely precise physical alignment of the three separate output beams.

LED and lasers are two promising illumination technologies that allow you to flash the three primary colours onto a single DLP chip very much faster than any spinning colour wheel. But matching the brightness of traditional UHP lamps with these approaches is currently inhibitively expensive. I think we’ll get there in the long run, but meanwhile the strangely Heath Robinson spinning colour wheel (first used in this context in the late 1920s for John Logie Baird’s colour television) prevails.

The spinning colour wheel works astonishingly well, but there are many different ways of implementing it physically, and multiple options to be made about the associated software. BenQ’s choice of the W2000’s RGBRGB colour wheel, supplemented with a touch of optional BrilliantColor, in a well-built projector of elegant industrial design for a street price of less than £800 is in my opinion a clear winner.

If you’re confused by that “6x” speed of a colour wheel—yes, I was too. It’s probably enough to know that “6x” refreshes the colours so fast that you should never be aware of the “rainbow effect”. The most likely explanation I’ve come across is that the “x” represents the wheel rotation speed compared with the speed of the original 3600 rpm three-segment RGB colour wheel.

This isn’t the physical speed, however. Now that the wheel has twice the number of segments, the industry feels it’s fair to claim that a wheel spinning just three times faster than that original standard counts as a “6x” wheel.