With the raw mechanics of RAID out of the way, we’re now ready to get some fun out of this QNAP TS-451 NAS. You’ll have realised by now that it’s a lot more than a chunk of  11TB of storage on my LAN. The daemons we talked about in part 1 can be set to work behind the scenes whipping up all kinds of magic. 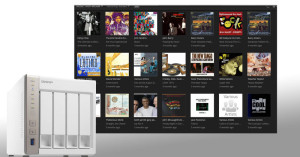 FOR THE PAST SEVERAL MONTHS the QNAP TS-451 has been working hard as the main audio-visual delivery system through my LAN into to my AV Receiver. In the last part of my review of the Yamaha RX-V679 I touched on the general principles of DLNA. The QNAP NAS comes with its own DLNA server as an integral part of the QTS operating system. But as I’ve mentioned, QNAP has an App Centre that offers many third party add-ons for optional installation. Among these are Plex and TwonkyMedia, each of which is a DLNA server in its own right. 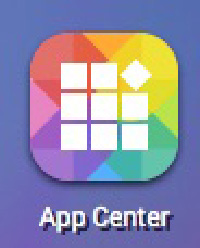 I started using TwonkyMedia almost a decade ago on various machines on my LAN. It runs on all the modern desktop and NAS operating systems, including Android devices. As well as being able to share and stream media to most UPnP AV or DLNA-compliant clients, the TwonkyMedia server can work with several non-UPnP devices using other data interchange formats like HTML.

is more than just a server—it’s a complete multimedia management system. It has its own client software, which runs on practically every piece of hardware and operating system you can think of, including set-top boxes like the Roku. But it can also feed vanilla DLNA clients. The full-blown Plex server-client combo presents a Netflix-like interface built from the multimedia content on your server, illustrated with film posters and record covers, and supplemented with associated movie synopses and music sleevenotes downloaded from the cloud.

Plex also has “channels”. These are server extensions let you connect to media offered over the Internet from TV Station catch-up services, news outlets, and other sources such as video sites like Vimeo or YouTube. Once installed on the server using the Plex Web App, these services become available to all the Plex client apps running on your network.

The Plex server is offered free of charge on all platforms. The client software is free to download, but will only run usefully after it’s been registered, and on the Roku when I first set this up early last year this cost me around three quid. Towards the end of last year Plex decided to make the client software free of charge on the Roku and the XBox 360. Plex still seems to be charging for the client version on other platforms. 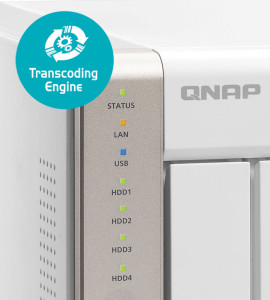 QNAP’s own DLNA server is a combination of add-ons that amount to a very comprehensive media management system for movies, music and photos, with added streaming and transcoding modules. The Media Streaming add-on works with four other QNAP add-ons that each curate different media under the QTS operating system: the File Station, the Photo Station, the Music Station and the Video Station.

Together these add-ons will stream media on the NAS to various devices in different locations simultaneously.  Streaming isn’t limited to DLNA—AirPlay and Chromecast work equally well, and audio content can also be played through the TS-451’s own HDMI output. More of that later.

Functionally all this very much resembles Plex. In the light of the huge audience for multiplatform Plex or TwonkyMedia compared with the relatively limited number of QNAP users, you might expect QNAP’s software to be less competent and infrequently maintained. It’s no exaggeration to say that I’ve been astonished that QNAP’s applications team has managed to produce a multimedia software suite that, as far as I can see, matches, and in some respects exceeds the capabilities of these rival products.

As with Plex, the advanced settings of the DLNA Media Server let you tune the output to suit different DLNA clients. DLNA, AirPlay and Chromecast also set limits on the kind of file formats they handle so—like Plex—QNAP’s server will transcode files on the fly as required. 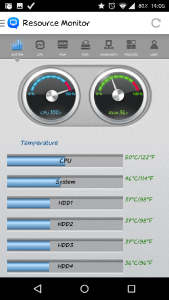 All this adds up to a fully equipped multimedia centre (and we have yet to explore direct output through the TS-451’s HDMI port). But QNAP brings yet more value to the party with a set of Android and iOS apps that promulgate all this fun into your tablets and phones.

Yes, I’m aware I’m starting to sound like a QNAP brochure. But seriously, for a hardware company all this specialist software development is very impressive indeed.

Google’s Play Store offers the following collection of QNAP-specific apps: Qfile, Qmanager, Qphoto, Qvideo, Qmusic, Qget, Qremote and Qnotes. And that list doesn’t include the apps designed to be used with QNAP’s security camera software, an aspect of the NAS I haven’t been able to test yet.

I won’t elaborate on all these here (the info is all up on Google Play Store and Apple’s Appstore), but three of them are worth a mention. The Qget app works with QNAP’s Download Station over the LAN or the Internet to initiate and manage Bittorrent downloads onto the NAS. It can also drive an app running on the server with the cheery Taiwanese name of Happyget. Happyget, now in its second version, is a Youtube downloader that can also grab picture albums from Facebook. 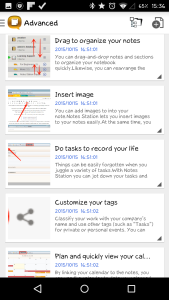 Qnotes is a very comprehensive mobile Cloud-based notetaker along the lines of Google’s Keep or Microsoft’s OneNote. If like me you have multiple mobile devices you’ll know how useful it is to have your notes synced across all of them, without the need to remember which particular device you made your original note on.

The key difference with Qnote is that your notes are stored in a private Cloud on the NAS, managed there by QNAP’s Notes Station app. I was going to say “safe from the prying eyes of the NSA and GCHQ” (QNAP’s marketing material quaintly calls it “…an effective way to take notes with highly privacy”) but these days we’re not that naive. For extra security, through, you can switch on note encryption.

Qnotes deserves a full review of its own. I’ll just mention here the calendar and to-do functions and the fact that it can work with a Chrome plug-in called Notes Station Clipper that grabs page content and backs up Gmail messages. As well as rich text, it’ll save audio and photos, either previously stored or taken directly using the device’s camera.

The third mobile app worthy of mention here is Qremote. As you might guess from the name, this turns your phone or tablet into a remote control. We’re going to need this for the next part of this adventure, when I finally connect the TS-451, not through the LAN, but directly via its HDMI output socket into my Yamaha RX-v679.