I ended the last part by failing to lament the absence of DAB on the Yamaha RX-V679 Receiver. What the device does have wireless-wise—not counting the wireless network capability we’ve already discussed—are Bluetooth and (a limited version of) Apple’s Airplay. I wind up the adventure with this useful extra connectivity.

THE RX-V679 IMPROVES ON THE RX-V677 model it replaces with the welcome addition of Bluetooth. (A plug-in Bluetooth accessory was available for the earlier model for around £50.) If I’ve been disillusioned over the years by DAB, my relationship with Bluetooth has developed in the opposite direction. Some five years ago I mocked Sennheiser for introducing a pair of Bluetooth headphones—I’d heard Bluetooth audio in the past and thought the limited bandwidth and the need for tight compression codecs at each end of the wireless link precluded the technology from the sort of serious music listening Sennheiser was famous for.

Sennheiser rose to the challenge by sending me a pair of their top-end Bluetooth headphones. I was gobsmacked at the sound quality. I hadn’t been paying attention, and two things had happened to Bluetooth since I’d first developed my very firm opinion of the technology (columnist do tend to develop very firm opinions). Bluetooth’s bandwidth had widened considerably, and acquired new codecs able virtually to abolish compression artefacts. 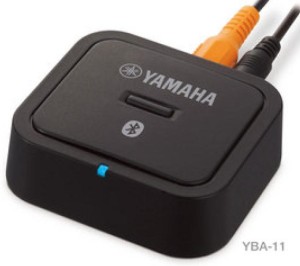 So until the arrival of the RX-V679 I’d regularly been using Bluetooth to get music from my phone to my old (but much loved) ten-year-old Harman Kardon AVR 630 by way of a third-party add-on dongle. Now having it built in, with the digital music signal passing directly into the Yamaha preamp instead of having to go in through the analogue audio input is a huge convenience.

But you may well be asking, isn’t Bluetooth superseded, now that many AV receivers can handle Airplay?  This Apple-developed proprietary technology uses a WiFi connection to take music from a source like an iPhone or a MacBook and play it through the RX-V679. I found I could also do this from an Android phone with some apps, notably BubbleUPnP, that understand AirPlay. So provided you have an Airplay capable app on your phone or tablet (and it’s built into iOS devices and MacBooks) you can do everything music-wise that Bluetooth can do, and better.

Apple introduced Airplay under the name of AirTunes as it was audio only. AirPlay now includes video, and because the Yamaha receiver tells your LAN it handles AirPlay (rather than AirTunes), other AirPlay enabled devices can be fooled into thinking they can play video to it. But although the “AV” in “AV Receiver” stands for Audio-Visual, Yamaha’s AirPlay implementation (in common with most similar AVRs) is strictly audio-only.

Because it’s WiFi, the range is longer (by at least 3 times), and the much wider bandwidth means that Airplay can use Apple’s own ALAC (Apple Lossless Audio Codec) to pass the signal with no deterioration of quality.

Bluetooth’s edge, of course, is that it’s ubiquitous, whereas manufacturers have so far been reluctant to flock to Airplay, probably deterred by Apple’s notoriously handsome licensing fees. And I think you’d be hard pressed to detect any difference in quality these days, now that Bluetooth has gained enough bandwidth (a generous 24Mbps) to give its standard SBC codec sufficient headroom and to make more advanced codecs like AAC practical. The RX-V679 incorporates both these. Surprisingly though, the proprietary aptX codec, widely promoted as effectively lossless, isn’t included in Yamaha’s Bluetooth stack.

Since the RX-V679 arrived, Yamaha has added a new multi-room wireless technology, MusicCast. Thanks to a firmware update this machine is now MusicCast capable, but I haven’t been able to test this yet. Yamaha MusicCast is something I’m hoping to be looking at in a few months time.

We’ve talked about some of the different ways of getting music tracks into the RX-V679. I find the that much of the time I’ve been using the most direct method available: DLNA.

DLNA, named after the organisation that supervises it, the Digital Living Network Alliance (you’ll find an old article of mine about it here), is a standard for managing the interoperability of multimedia devices, so that the digital media server (DMS) feeding music, photos or movies to your network will cooperate smoothly with the digital media player (DMP) that is delivering the music to your ears.

The DMP does two different jobs: it controls what’s selected from the server, and it plays the media (“renders” it, in the jargon). These two functions can be separated, so the DLNA network may have a digital media controller (DMC) elsewhere on the network instructing a digital media renderer (DMR) on what is to be delivered from the DMS.

The RX-V679 implements an audio-only DMP, optionally controllable from outside by DMCs in the phone app or the Web interface. The mandatory DLNA audio formats include MP3 and AC3, but Yamaha’s implementation also includes two superior optional formats, AAC and FLAC.

My favourite DMS is Plex running on my QNAP NAS, which I can also use for serving up movies to the Roku 3. Plex has the advantage that if a DMR isn’t capable of playing a particular format it can transcode it on the fly.  My preferred library format for audio is FLAC (Free Lossless Audio Codec), which as the name implies, uses maths-only compression and doesn’t (like MP3) make judgements about what parts of the frequency spectrum can be thrown away. As the Yamaha renderer understands FLAC, Plex passes tracks to it without re-encoding.  Tech-minded readers might like to know that the RX-V679 can handle 24bit, 96kHz FLAC for really decent hi-fi that qualifies as High-Resolution Audio (HRA). That definition includes even higher resolution and sampling rates, and you’ll find devices and audio sources boasting 96bit 192kHz encoding. But can you really hear the difference? 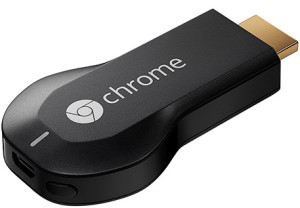 My Chromecast is the earlier type.

I didn’t mention Chromecast when we were talking about wireless connections because unlike Bluetooth and Airplay it’s not built into the Yamaha AVR. But for thirty quid (or sometimes lot less, depending on Google’s mood of the moment) it makes a handy general-purpose add-on. About the size of a large USB stick, it’s designed to plug directly into any HDMI port and is powered by a cable into its microUSB port.

Happily the RX-V679 provides USB and HDMI side by side on its front panel, so this makes a good place to at least test Chromecast, although if you make it a permanent addition you’ll probably want to move it round to one of the rear HDMI ports. Alas Yamaha doesn’t provide a USB port at the rear so you’ll need some other way of getting the power in. I use a neat little four-way mains to USB adaptor I picked up on eBay for a fiver (including p&p). 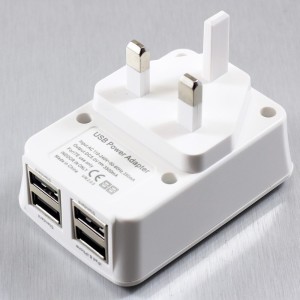 The Chromecast plug-in for Chrome is the simplest way to demonstrate this. Drop an MP3 file onto a Chrome browser page and then use the plug-in’s icon that appears in Chrome’s toolbar to send the track across to the Chromecast. Unlike Airplay you’ll need to have the RX-V679 already switched on and set to whichever HDMI socket the Chromecast is connected to.

One big advantage Chromecast has over Yamaha’s implementation of Airplay is that it will also cast video. So as a bare minimum the RX-V679 with a Chromecast in conjunction with a phone running apps like Flipps HD and Netflix could provide a full-scale family home cinema experience. Sadly the Amazon’s rival to Netflix,  the Instant Prime Video app for Android, doesn’t do Chromecast – for that you’ll need an Amazon Fire TV Stick (another thirty quid).

By the way, that front panel USB socket I mentioned isn’t there just to power devices like the Chromecast. You can fill a USB memory stick with WAVs, MP3s and/or FLACs, switch the input to USB and play them directly. As you can get nearly 50 CDs as FLAC onto a 16GB USB stick (these days costing less that a fiver) this would be a great way of organising your music if you don’t have a NAS.

I gave headphones something of a roasting in the first and fourth episodes of this saga. I still maintain that outside the concert hall nothing beats living-room listening, but I’ll confess now that I’ve been using headphones a lot in conjunction with the RX-V679. When the family’s gone to bed and you want to catch up on Netflix, headphones come in very handy. 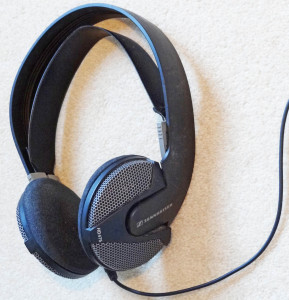 Yamaha has anticipated this with its “Silent Cinema“. Admittedly controversial among audiophiles, this feature attempts to emulate the various DSP Programs we talked about in episode 4 on a pair of regular stereo headphones. To my ears it succeeds in delivering a measure of spaciality (moving the sound somewhat from inside your head into the space around you) without introducing distracting artifacts.

Silent Cinema is only delivered through the RX-V679’s headphone jack socket on the front panel. So if you’ve hooked up your headphones to the spare (if you’re using a 5.1 speaker set-up) stereo channel output at the rear of the machine you’ll have to sacrifice this feature.

This review/adventure has been a longer journey than I anticipated. Thanks for sticking with it (if you have). I suppose you could correctly call it “an appreciation”, in the critical sense of the word. I’m grateful to Yamaha for giving me the opportunity to live with the kit, so that rather than a merely mechanical overview with some dry statistics I’ve been able (or have at least tried) to convey a flavour of what it’s like when you make the RX-V679 a member of your family.

It’s really no exaggeration to say it’s transformed the way I listen to the vast pile of music I’ve accumulated over the years, and (largely through the Internet Radio connection) opened me up to a raft of new material.

Video-wise the RX-V679 has tidied up my living room and helped make sense of my raggle-taggle collection of set-top boxes. It’s also made it a lot easier to set up the projectors I review here from time to time.

“Appreciation” doesn’t just mean “gosh, I loved it.” The word carries the sense of “recognition and enjoyment of the good qualities of something”, and I believe I’ve certainly done that. But it also implies “a full understanding of the situation”, and in that context I’ve drawn attention to some of the shortcomings of the user interface design. These aren’t unique to Yamaha, by the way – the consumer audio industry as a whole has a fair bit of catching up to do.