The first 10″ iPad at the beginning of this decade took two hands to hold comfortably, so you’d need a third hand for pointing, tapping and swiping. Three years earlier the iPhone had introduced us to a new sense of touchy-feely intimacy with the device we held, but its 3.5″ display was too small once you’d popped up a virtual keyboard.

❝
No one is going to buy a big phone… you can’t get your hand around it.❞
Steve Jobs, Oct 2010

And then came the 7″ tablet. There was room to work with an onscreen keyboard, and the thing would easily slip into your inside jacket pocket. If you happen to wear a jacket.

When Samsung’s Galaxy Note was launched in 2011 its 5.3″ screen was the largest a phone had ever used, but it would fit nicely into a shirt pocket. People laughed at me when I showed them the review sample Samsung had sent me. It was pronounced big and ugly, and journalists devised an ugly word for it: the “phablet”.

Samsung wasn’t sure about it either. They’d created it as an experiment, and were surprised when 1 million Notes sold in two months. By the following summer 10 million people world-wide had discovered, as I had, that this was the ideal form factor for a device you would use for Web surfing, emailing, book reading, and just about everything else you’d learned to do on a PC (even writing reviews like this one). But unlike the PC, it would be always with you. 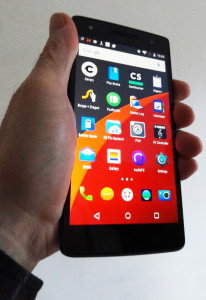 THE WILEYFOX STORM IS a right-sized 5.5″ touchphone for a shade under £200. It comes from the same stable as the 5″ Wileyfox Swift I reviewed here last year, and the two have much in common, notably the Cyanogen version of the Android operating system. I’ll avoid going over the same ground twice, but in what follows I’ll take the opportunity to mention some common features the earlier review doesn’t cover.

There are two key differences, apart from the size. Most fundamentally, the Swift’s replaceable battery has succumbed in the Storm to the now very widely adopted fashion for a battery embedded—or perhaps “entombed” would be a better word—inside the device. This means there’s no removable back, which in the Swift is how you get access to the dual SIM and microSD slots.

Instead, the Storm employs an iPhone-style spring-loaded tray in the left hand edge of the phone that is released by pushing a supplied special tool (or any thin pin, if you’re careful) into a small hole.

Why does an entombed battery matter?

Today’s battery technology should see you safely through the first 18 months. But after that you’re taking your chances. The battery may start to get hot, to swell physically and generally to lose its goodness.

Phone manufacturers don’t mind this because after 18 months they feel it’s time to sell you a new phone. You may well feel this too: the technology is changing fast and the next generation will be bristling with new features.

But even if you buy a new phone, the old one need not necessarily end up in the bin. Particularly if it’s of a size you can use at home as a handheld tablet—say 5″ and upwards. Even a smaller phone can have its uses, for example as a remote control when running an app like the one from Yamaha I use to drive my RX-V679 AV receiver. Swapping out a replaceable battery can give new life to an old phone for less that a fiver. But if that battery’s entombed—tough luck.

What don’t I like about this? Well, getting the tray out, and once it’s out, aligning the small cards exactly into their cutout compartments and sliding the assembly smoothly back in is fiddlitudinous. It’s also dilemmatic: as the tray only has two cutout compartments you have to decide whether the second one is going to be for a SIM or a microSD card. Unlike the Swift which has slots for all three, you don’t have the option of dual-SIM and a microSD card. 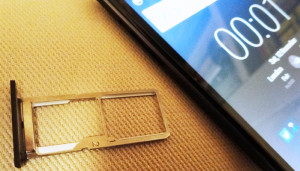 While I’m in complaining mood (we’ll get on to the good stuff in a moment) let’s talk about the screen. It’s full HD (1920 x 1080) with good viewing angles, well-saturated colours and deep blacks, and ought to be one of the phone’s best selling points. Which it actually is—except that Wileyfox sells it with a pre-installed screen protector. So far so good; the smaller Swift is similarly equipped, and its screen protector is so unobtrusive that I only noticed it after a week of use. But the screen protector on the Storm is very poorly applied.

Having flattened out a couple of the more prominent air-bubbles I decided to keep it in place, as I’d done with the Swift. This wasn’t a good idea. It didn’t take me long to discover that the screen’s touch sensitivity was decidedly uneven, to the point where the Swype virtual keyboard I’ve been using on Android phones for the past few years was skipping letters and breaking up words into meaningless fragments.

The sliver of translucent plastic stripped off easily, and the problem was solved. I mention it only because other reviewers and users have complained similarly about the uneven application of the protector, and an unsuspecting punter might think the phone was fundamentally at fault.

With those niggles out of the way, the fun starts. And it starts with Cyanogen, the Android-based operating system that really makes a difference. I sing its praises in my earlier Swift review, but I’ll take the opportunity here to say a little more about why I like it so much. 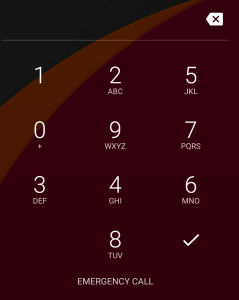 Privacy Guard, which I mentioned in the previous review, has some companion features that complement the security-consciousness that is the Wileyfox hallmark. Among the screen lock options is one called “Scramble Layout” for use in conjunction with a PIN unlock. On a standard Android phone any eagle-eyed onlooker can make a good guess at your PIN by watching the movement of your fingers across the screen. As its name implies, “Scramble Layout” dispenses with the conventional top-to-bottom disposition of the digits across the unlock keyboard and presents them to the screen in a different order each time it’s evoked.

Thanks to the Cyanogen operating system, the Storm (like the Swift) extends its security arrangment to phone calls too. In the Security section of the Settings menu is an option to Lock the SIM against a PIN (this is a separate PIN from the one mentioned above in Scramble Layout) and if you’re using the Storm’s dual SIM feature you can set a separate PIN for each SIM.

Under the same Privacy section of the Settings menu as the Privacy Guard function I mention in the Swift review is a function to create a Blocked Caller List to prevent nuisance calls. A similar feature is available to Samsung users as part of the Touchwiz interface under the heading Call Rejection, but I haven’t found anything equivalent in the regular Lollipop release.

Of course a blocked caller list isn’t going to help you much the first time you get the unwanted call from a new number. Which brings us to another interesting if perhaps controversial feature recently added to Cyanogen: “Truecaller“. Truecaller is also the name of the separate US company that operates the Cloud service behind the feature. Its premise, in the company’s own words, is that “being able to identify who is calling your most personal possession is an important part of streamlining your communications experience.” 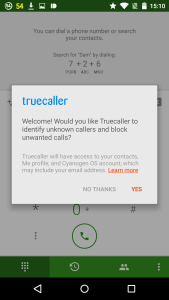 Truecaller is integrated into Cyanogen’s dialler app. The benefit it holds out is that you always know who’s calling you, and as a corollary can set the app automatically to block spam calls—without having to set up a blocklist first. This sounds great until you investigate (as the Website xda-developers.com did) how the service gathers its data.

In order to run on your phone Truecaller needs access to your own phonebook. Naturally it’s polite enough to ask your permission to do so. You weigh the benefits, and may decide: OK, go ahead. The Truecaller company then adds the contents of your contact list to its own database. Not just everyone’s phone numbers, but their addresses, job titles, the companies they work for and—maybe, I don’t know—any notes you’ve made about them.

In short, it’s a Facebook-style data leech. It may even, as the XDA-Developers Website suggests, be in breach of European law, which requires not just your consent, but the individual consent of each person listed in your Contacts.

Naturally Cyanogen and Truecaller don’t see it like this. Thanking its “vibrant global community” for the gigabytes of data it’s trawling in, Truecaller claims to bestow on its users “more choices, control, convenience, and a better overall communication experience on their mobile devices”.

See How She Runs

Performance wise the Storm punches above its weight: its octa-core 1.5GHz Qualcomm Snapdragon 615 chipset and 3GB of RAM puts it on a par with phones costing up to £100 more. I’d have liked a longer battery life—with the same 2500mAh capacity as the smaller Wileyfox Swift, the fully charged Storm will just about get me through the working day. During these tests I’ve taken to carrying a spare power bank as a precaution.

The 8 megapixel selfie camera is more than adequate for the job, but I’ve noticed that other reviewers have been disappointed with the 20 megapixel rear-facing camera. It’s true that contrast levels aren’t outstanding, and I’ve found pictures may need punching up with a photo editing app like Pixlr. If photographs are really important to you, you’ll probably want to pay nearly twice the price for a Galaxy S6.

Unlike those pricier phones, the Storm lacks a some features you might miss. I do. Ideally, I want a phone that can use the 5GHz wireless spectrum, understands NFC and (c’mon, guys, it’s a no-brainer) can do wireless charging. If you find these indispensable, the Storm isn’t for you. If you can live without them—and these tests have taught me I just about can—the Swift might well be the phone you’re looking for. But in that case you’ll also want to consider the Vodafone Smart Ultra 6.

I find I’m starting to go off bling phones that shout Hey, look at me, I’m rather costly! Phones aren’t jewellery, and now they’ve become a quotidian utility the glitzier high end handhelds are beginning to look (to me) like the gold chains and earrings worn by your standard TV series drug dealer. Of course your standard TV series drug dealer wouldn’t be seen dead with a bling phone: his phones are always going to be “burners”—cheap, disposable mobiles you can use and lose.

To Have and to Hold

As with my Swift review I’ve left a discussion of the physical attributes of the phone until last, if you don’t count my whinges about the battery, the SIM tray and the screen. That’s because—those complaints apart—the phone is unremarkable. And I mean that in the best possible way.

Phones the class of the Storm aren’t quite burners yet (and I’ve no plans to bin the Storm any time soon). But I very much like the fact that it’s—well, the word is “unobtrusive”. In the hand it feels reassuringly solid, and the edges, slightly bevelled away towards the back, are good to grip. Although it’s no great looker, to the touch this is very much a premium phone. But that’s going to remain your secret. I like that a lot.