nVidia launched the Shield Android TV here in the UK on September the 30th last year. Normally, journalists expect review samples to be available either at the launch itself, or very shortly after. With the Shield it took three months and a dozen or so email exchanges with nVidia’s hard-pressed PR rep, Ben Fletcher, before I could lay my hands on it. And even then—as you’ll have gathered from the story so far—that was only the prelude.

We should finally be able to get started now… 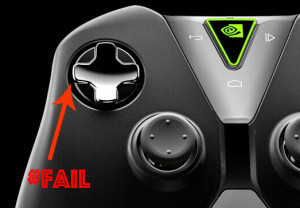 LAST TIME I PROMISED to tell you what I’d learnt from the absence of the games controller while it was off on its RMA hospital visit. Although Asphalt 8 offers other ways of steering, the failed button turned out to be essential for navigating through the game’s menu of races. The alternative, the cost option one-handed remote control, was still fully functional, of course. But Asphalt 8 declines to work with it under any circumstances.

So no Asphalt 8 on the Shield during the games controller’s absence. There was another snag too: the single-handed remote I was left with has no right-click button.

I’m calling it a right-click button because its function is equivalent to the context-menu button on the right-hand side of the standard PC mouse. On the (sadly absent at the time I discovered this loss) nVidia Blake games controller this function is evoked with the X button. There was simply no way of doing this with the official nVidia one-handed remote.

Which meant that the version of Kodi I was running at the time, v15, aka Isengard, was missing important functions. Without the games controller, Kodi-wise I was sunk.

(Or so I thought. But see box)

Your Phone is your Kodi Remote

I discovered too late that Kore is a superb app that turns your Android or iOS device into a remote control for Kodi. It even allows you to use it for direct text entry, for example when setting up account names and passwords. More about Kore here.


Kodi on the nVidia Shield

I presume readers of set-top box reviews like this one will already know all about Kodi. If not, you need to dive in immediately to the introduction to it in my review of the Amazon Fire TV Stick. Happily, nVidia and Google don’t seem to agree with Amazon’s view that Kodi is essentially a mechanism for downloading unauthorised copyrighted material. The Shield TV won’t make you jump through hoops to install this superb and essential application—it’s right there in the Google Play store, available in the latest version.

Ah, yes, the latest version. I’ve just installed it, v16.0, aka Jarvis, and you can now ignore the paragraph above about the perils of trying to drive Kodi using nVidia’s one-handed remote. Fergeddaboudit. Jarvis comes to the rescue by adding an extra physical button to the nVidia one-handed remote.

❝More and more hardware companies are coming out with remote controls with a very limited button set. In particular, all current Android TVs are lacking a dedicated context menu button altogether. To deal with this, we’ve taken a page from the touchscreen UX and added a long press feature to remote controls. Now, if you press and hold the OK/Enter button for a few seconds, you will pull up the context menu. In the future, long press may be extended for additional functionality.❞

I’m kidding (but you spotted that, of course). What Jarvis has done instead is make the remote’s central OK button dual purpose. A short press carries out the standard click function, but now a lo-o-o-ng press will bring up that essential context menu. Job done.

In fact, this short-press/long-press duality is already present on the remote’s Home button as a general feature of the Shield. From anything you happen to be doing on the Shield, a short press on the Home button will take you to—er—Home. A long press, however, brings up the Record Window.

Back in the days of the PS3, gamers who wanted to share or store their best moments had to spend a couple of hundred quid on extra hardware. The current generation of gaming consoles have enough spare processing power for this recording function to be built in. The good news is that the nVidia Shield TV Box does too. Whether you just want the odd screenshot, or a video recording of an entire game, a long-press on the Home button can set this up for you. If you’re a Twitcher you can use this menu to broadcast your game live.

Auto Record creates a running buffer (you choose the length of time in the Settings menu shown top left) which allows you to stop at any time and save the last however many minutes. Manual Record is used for conventional start-stop recording.

These games are very addictive, and obviously central to the concept of the Shield. But having to get by without the games controller did have the merit of forcing me to explore the many other aspects of the Shield I’d been neglecting. Even if Kodi didn’t exist, the Shield would still be my choice as a media centre. I’ll be exploring that in part 5.