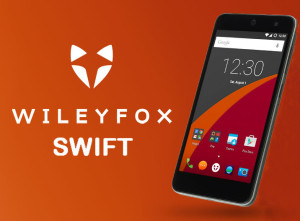 The Google guy who showed me my first Android phone some six years ago was very keen on the flexibility of the new operating system. “Look,” he said, “see how screen rotates from portrait to landscape when you turn the phone round!”

I said that seemed like an intelligent feature, but then Google was clearly an intelligent company. “What happens,” I asked, “if you rotate it now through 180 degrees to the upside-down landscape mode? He hadn’t thought of this. He tried it. The screen rotated accordingly, leaving the picture the right way up. He seemed very pleased. “Now try reverse portrait mode,” I suggested… Aaaah!

IF YOU TURN THE SIM-free Wileyfox Swift upside down in portrait mode, the screen rotates through 180 degrees, remaining the right way up. Regular Android phones won’t do this. Is this is a big deal? No. But it is a single instance of a multiplicity of what I’m inclined to call “Freedom Features” you’ll find in this delightfully detailed Android device.

“Cool” white with a bluish tint paradoxically appears on the Kelvin colour scale at the higher temperatures over 5,000K. Drop the Kelvin temperature and the whites warm up, appearing yellower, lower still taking on a reddish tint.

This all makes perfect sense if you think of a traditional lightbulb filament, or steel in a furnace. At low heat it will begin to glow red, becoming yellow and then bluish white at the very highest temperature.

Screen colour temperature? With the Wileyfox Swift it’s your choice. In the daytime a hard white, somewhere around 7800 Kelvin, might be the business. At night, even with the screen auto-dimmed to match the ambient lighting, you might want the display looking a little warmer, having read reports that too much blue light can be damaging to the retina, and can also harm your sleep patterns. So let’s bring that down to 3700K. (Yes, on the Kelvin scale warmer colours are actually a lower temperature — see sidebar.) 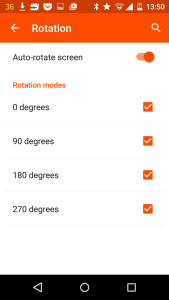 The upside-down portrait screen-flip is optional. Screen rotation isn’t just an on/off toggle, as it is with most phones.

As I say, these are small points (there are  many more — the ability to edit the illuminated navigation touch buttons at the bottom of the screen, for example) but they add up to a valuable sense of user control. Or to put it another way: no question, this quickly becomes YOUR phone, rather than you becoming just another <name of manufacturer here> user.

Pretty well every aspect of the Swift user interface is customisable. But Wileyfox’s philosophy of putting you in charge is more than skin deep. Privacy Guard is one good example. This is a security feature that probably should have been on Android devices from the start.

When you install an Android app it declares the privileges it needs, like the ability to read your location, help itself to your contacts list, check your Web bookmarks and so on. A typical Andoid phone offers you a take-it-or-leave-it deal on each app — if you don’t like what it’s grabbing in the way of your information or resources your only choice is not to install the app. Privacy Guard gives you the option of still installing the app, but allows you to switch off any of the privilege grabs that don’t suit you.

Protected Apps is another elegantly implemented security feature. Dropping one Home screen icon on top of another instantly creates a folder. Other Android implementations can do this, but on the Swift the folder carries a small open padlock icon. Touching this to close the padlock makes the folder lockable against a security pattern. A Home screen menu function also allows you to lock individual apps.

These Freedom Features, as I call them, appear as a fundamental part of the operating system. You don’t get the feeling — as with many other manufacturers — that you’re encountering a bunch of proprietary add-ons designed purely as differentiators in a crowded competitive field. Wileyfox has a straightforward policy about “crapware”. There isn’t any. So along with Freedom Features you also get Freedom from Features. And it’s a refreshing change.

Nick Muir, Wileyfox CEO, comes from Motorola, which during the all too brief Google regime produced some stunning low-cost high-function no-nonsense handsets, and Wileyfox seems to be continuing in that tradition. Muir feels the phone design in the past has been bogged down because the large carriers were seen as the only possible route to market. Things are changing now, he believes, and it’s high time handsets were built around what the customer needs rather than the dictates of the service providers.

But how does a small UK company come up with a reformed version of Android that embraces all these virtues? Simple answer: it doesn’t. Muir had the nous to adopt Cyanogen.

Cyanogen (pronounced sigh-AN-oh-jen), is a start-up company recently formed around a thriving open source development called CyanogenMod. “Cyanogen” was the forum handle of Steve Kondik, the chief developer, who realised that Google’s Android Open Source Project could form the basis of a cleaned-up, streamlined version offering better performance and reliability than what big vendors and carriers were feeding their customers.

The “Mod” bit applies to the various builds of the operating system the group released to “modify” existing market phones. For the past 18 months I’ve been running CyanogenMod on my old Galaxy Note 1, bringing a fresh breath of life to this four year old handset.

The “Mod” version of Cyanogen lets you root the device, giving the user total access to everything the operating system does. This is the ultimate freedom, but it’s also the freedom to totally screw everything up if you don’t know what you’re doing. This is why phones are normally sold unrooted, and that’s the fundamental difference between the geekish CyanogenMod and the commercially available Cyanogen the Swift runs. You can’t root Cyanogen. But this certainly isn’t a showstopper. If you must have an unrooted Swift (and are prepared to forego your warranty), full instructions for replacing Cyanogen with CyanogenMod are available on the Web.

The standard Cyanogen browser comes with Bing as the default search engine. I was surprised to find there’s even a Bing button on the home page to take you straight to it. It turns out that Microsoft has shown an intense interest in Cyanogen, and in April this year announced a “strategic partnership” that will eventually result in a whole raft of Microsoft services sweeping onto the platform.

Skype, OneDrive, OneNote, Outlook, and Microsoft Office are promised in the future. Happily (I’m no Microsoft fan) Bing seems to be the only Microsoft stowaway in the present version, and it’s easy enough to tip him overboard simply by deleting the Bing button and choosing an alternative search engine for the browser. Chrome is also installed by default, and Bing is banishable from there in the same way, if you’re so inclined. The open nature of the operating system should be a guarantee that you can treat any similar incursions from Microsoft similarly. It’s my guess that Microsoft may be covering its (apparently losing) bet on its own Windows Phone operating system by supporting Cyanogen with financial backing.

I’ve said almost nothing so far about the physical attributes of the phone — mostly because I have very few complaints. It has a decent sized, crisp 5″ 720p screen with good viewing angles, protected by Gorilla 3 glass. As a belt-and-braces, the Gorilla glass comes with its own firmly attached unobtrusive screen protector, something I only noticed when indentations appeared on it due to carrying the phone in the same pocket as my keys.

There are the usual two cameras: 5 megapixel front-facing, 13 megapixel rear. Two vents set into the bottom edge of the phone on either side of the microUSB charging socket suggest a pair of stereo speakers, but in fact only one vent produces sound — rather well, as it turns out. But plug in a pair of headphones (I’m glad to report that Wileyfox doesn’t insult you by bundling the typical junk earbuds) and you can experience really good hi-fi, thanks to the systems ability to handle 24-bit encoded, 96kHz FLAC. “Steve Kondik,” says Nick Muir, “is a bit of an audiophile.” 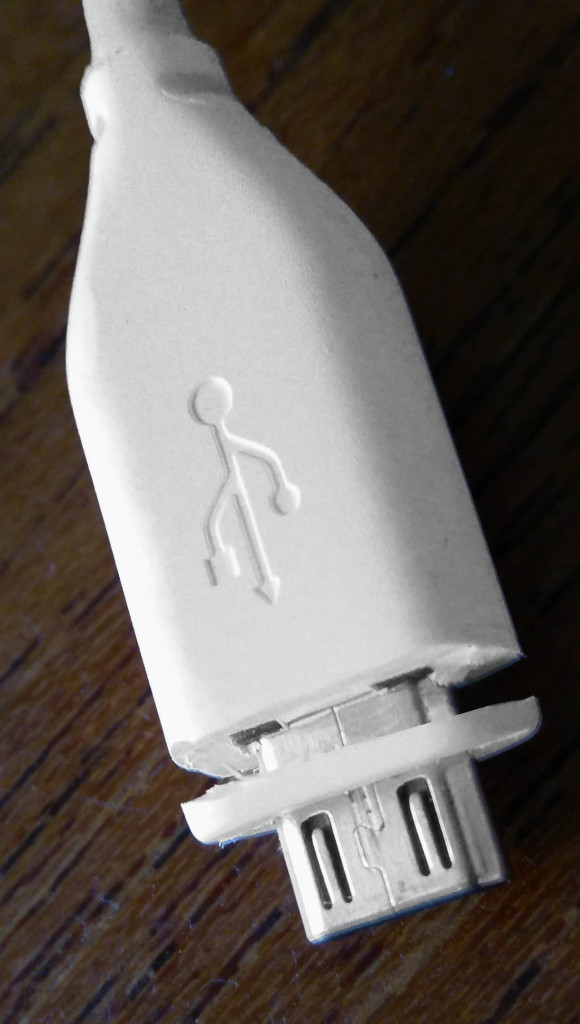 Slice around the insulation to remove about 2mm of plastic

One bone of contention among reviewers has been the design decision to embed the microUSB socket a couple of millimeters deeper than usual. A suitable cable is provided with the phone (no charger, however) but I found that the USB plugs on several of my existing microUSB cables weren’t long enough to stay connected — unless you manually hold them in they simply fall out. Muir says the deep socket is a protective measure, as with daily plugging and unplugging a phone’s USB is often the first point of failure (this has certainly happened to phones of mine). Rather than buy new cables I found an easy workaround is to shave back the plug insulation on a standard USB connector with a sharp hobby knife.

Muir: “Rather than smash a lot of stuff into the handset and then work out what we could sell it for, we decided to work out what people want to pay, and then we’d cram as much into the phone as we can.”

The matt-black back is removable to access the microSD slot (Hurray!), replaceable 2,500mAh battery (Hurray!), pair of SIM slots (yes, it’s dual SIM – Hurray!). That’s three rousing cheers for the Swift, and one more for the price, a very affordable £130, give or take a penny or two.

For a little more money Motorola is currently offering a similar phone with only 1GB of RAM and 8GB of flash (review of the more expensive 2GB version here). The Swift has 2GB of RAM and 16GB of flash. It does 4G/LTE. If you don’t mind the omission of NFC and the WiFi being only 2.4GHz (common enough limitations among this class of handset) the Swift looks like a winner.

The only close rival I can think of would be the Smart Ultra 6 from Vodaphone, which has a larger, 5.5″ screen. Although the Ultra 6 runs a respectably uncluttered version of Android Lollipop, the Swift’s Cyanogen 12.1 release (also based on Lollipop) just about clinches the deal for me.