In Part 2 of this nVidia Shield follow-up I detailed installing the Toshiba Exceria Pro SD card as adoptable memory. I also related the somewhat hairy adventure of switching this card for a PNY microSD. Now read on…

The PNY microSD card is rated as Class 10, which is fast. Plug in anything slower than this and the Shield will let you adopt it, but warn you you’re in for a bumpy ride. Class 10 is equivalent to a new speed classification called UHS 1 (ultra-high speed). To qualify for this the card has to have a write speed of at least 10MB/sec.

What does the extra speed buy you? That depends very much on how you’re using your Shield. Moving apps across to the PNY adoptable storage was noticeably slower than the same procedure using the Toshiba card. But this app migration is a one-time event: once the apps are in place, fast moving games like Asphalt 8 ran as smoothly on the PNY as on the Toshiba.

The speed difference does show up, though, when the Shield’s multitasking. The average Shield user may not often be screen recording a racing game while downloading a file with Kodi and at the same time shifting data out of the Shield across the LAN to a NAS.

With the Exceria Pro installed as adoptable memory my Shield carried out these simultaneous tasks with ease. When I reverted to the PNY as adoptable memory I wasn’t surprised to find the occasional hiccup when running a number of tasks like these together. What did surprise me was how few hiccups there were. But any hiccup on a screen recording is something you’re stuck with.

The Shield’s Games Recording isn’t just limited to games. It’s essentially general screen recording, although guard arrangements with specific apps are there to defeat any ideas you might have about grabbing, for example, Netflix movies.

If you’re using screen recording there’s one limitation you need to know about when adopting external storage. Normally the Shield TV will offer you four recording qualities: Low, Medium, High and Ultra.

Adoptable memory Gameplay Recording restricts you to “Broadcast”. This doesn’t as I originally feared broadcast everything you record directly to YouTube. It is simply shorthand for “I am not risking giving you the best quality in case your adoptable memory can’t handle the speed. So I’m going to restrict you to the same bandwidth limitation as when you’re broadcasting to, say, Twitch.” This means you can’t have ultra quality, only high-quality, which is 720p at 30ish variable frames per minute.

The bug appears to be purely cosmetic. 1080p recording is restored as an option, even though the Shield insists on still calling it “Broadcast”. I’ve tried my best to report this to nVidia. But as we’re beginning to learn, software companies these days don’t recognise “bugs”. Problems like this have become “User Issues”. In other words, it’s my fault.

It is worth noting that you’re stuck with this limitation even if you’ve copied all your apps and data back into internal memory and removed the ST card. I was puzzled by this until I realised you probably need to go through the “forget this card” process before full quality game recording is restored.

Of course, “Forget this card” is a bridge-burning process, and you’d better ensure that all your apps and games are actually working properly before you do this.

There’s a bug, though, which seems to suggest that even when you’ve gone through the “forget this card” process, the “broadcast quality” limitation remains. Every recording you make after you’ve fully restored your system to “Internal” memory gets evoked as “Broadcast”. (But see Box right)

A caveat about Games Recording if you’re using external memory: 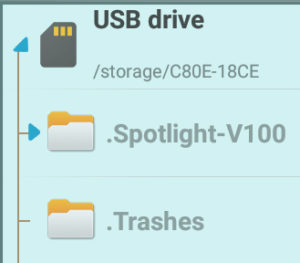 Stick in a microSD card, or attach a USB hard drive like the Toshiba Canvio Premium (which also shows up in X-Plore as an SD card) and you may start to wonder where your Games Recordings are disappearing to. They’re no longer turning up in their usual directory, called Games Recording. But you will be able to see them and run them from Google’s Photos and Movies app. Unhelpfully, this app doesn’t allow you to move or delete the files it finds, and doesn’t even give you a clue where they are.

For that, you need to turn back to X-Plore. After much hunting around, I found the games were now parking themselves in the obscure directory on the external memory.

Specifically: Android/media/com.nvidia.nvgamecast/Game Recordings. If you’re using more than one external storage device this directory gets created on all of them, so you may have to hunt around.

The other major advance since I first began this review is the addition of network storage. The Shield can attach SMB shares from other computers and NAS devices on your network and treat them is if they’re SD cards inserted into multiple virtual slots.

In fact, X-plore file utility will actually display these shares too as SD cards. The Android file system revealed by apps like X-Plore is—as I’ve already suggested—confusing enough, and this doesn’t help. But there’s yet more confusion to come.

A bug in the Shield operating system up to and including Shield Experience Upgrade 3.2 meant that if you’re using this SMB share attachment your Games Recording will refuse to work. It took a while for me to understand what was going wrong, because the recording mechanism simply complains that it’s out of storage space.

Happily this was fixed in Shield Experience Upgrade 3.3, which arrived at the end of October. You can now have read-write access to shares across your LAN, and do screen recording. But now, weirdly, I discovered I’d lost the location of those recordings once again. They were no longer buried deep under the Android directory in my external storage, although they were faithfully appearing in Googles Photos and Movies app.

They turned out to be back under Games Recording in internal memory.

The behaviour of third-party apps on the Shield does add an extra layer of uncertainty. Kodi’s inability to write anywhere other than Android’s native memory is one example. I still have to use X-plore regularly to get Kodi-downloaded material off the machine and onto USB sticks or my LAN.

I’ve settled on X-plore rather than ES File Explorer because the latter makes only poor allowance for non-touch devices like the Shield. But X-plore on the nVidia Shield TV seems recently to have introduced a major quirk of its own. It constitutes a serious gotcha for Shield TV users, so I’ve broken out the details as a separate Data Sheet.