Last time I said we’d be talking about the non-game uses for the nVidia Shield TV. As it’s an Android device (and, unlike the Amazon Fire Stick and Box, fully Google compliant) the Shield gives you access to a subset of the Google Play Store, although not all the apps there will be appropriate to its function. Let’s take a look at some that are…

THE NVIDIA SHIELD TV IS A SLICK launch pad for movie apps like the BBC iPlayer, YouTube and Netflix. Sadly, Amazon’s Prime Video isn’t available, one shortcoming compared to the Fire Stick and Box. Roku too has recently added Amazon Prime Video here in the UK, so the absence of Prime does feel like something of a hole in the product. Also missing are some of the key UK TV apps: notably, the ITV player, Demand5 and All4, with its very promising catalogue of International TV series under the Walter Presents brand.

The multimedia client Plex, obtainable from the Play Store, however, works beautifully on the Shield. In conjunction with the free server version that runs on multiple operating system platforms, including NASes like my QNAP, it catalogues and the plays movies, music and photos on your LAN, automatically fetching associated metadata and posters from the Internet.

Plex also has its own “channels”, piping multimedia from the Internet via its server. This enables the Shield to deliver services like Shoutcast, Comedy Central, CNN and HD trailers. For many users the Shield running Plex, YouTube and the iPlayer will provide a complete and entirely legitimate multimedia experience. Subscription-free too, unless you want to opt in to Plex’s premium Plex Pass service.

Built into the Shield TV is Chromecast which works very well as a target for movies, music or photos sent from your PC, Mac or phone. This also provides a workaround for the absence from the Shield of native apps like the ITV player. A limitation here is that the material must be in a format understood by Chromecast. The older AVI container format for movies, for example, won’t work.

But of course, there’s always Kodi, which has built in codecs for practically anything you’re like to want to pump into it. I touched on Kodi in the previous part, but it’s worth reminding ourselves of this first-class piece of free software that really isn’t to be missed. It belongs on every multimedia device, and the developers have gone a long way to making this possible, with ports to Android, Linux, Mac OS and Linux. Unlike the Amazon Fire Stick and Box, which requires a hack to hook in Kodi (but now much simplified thanks to the beautifully thought out free software adbfire app), Shield users can just grab it from the Play Store in the usual way.

Remote Voice and Audio on the Shield

The two-handed games controller and the one-handed remote are each equipped with a microphone and a 3.5mm audio jack. The microphone means you can talk into the controlling device in your hand and voice search for content, and even ask questions like “Movies starring Helen Mirren?” It’s a bit hit and miss, but works reasonably well across YouTube, Google Play movies and Google’s music service, also connecting into some of Google Now. Sadly, voice search doesn’t extend into the BBC iPlayer or Netflix. You can bring up Kodi by saying its name, but the system won’t voice search within the app. 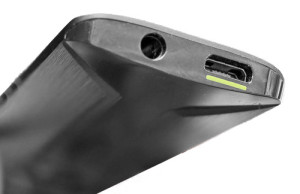 The 3.5mm audio socket borrows a neat trick from the Roku 3, using the wireless connection to relay audio into a pair of attached earbuds or headphones (not provided). The moment you plug the jack into the socket the audio out through the Shield’s HDMI socket mutes and the remote takes over. Like the Roku 3 remote, each of the Shield’s remotes have built in volume controls. The games controller uses a rocker switch for up and down, which works well. The finger-sensing slider on the remote seems rather more problematic, sometimes appearing not to work at all, and at other times rather randomly.

As a medium-priced games console the nVidia Shield TV is just getting started, and it’s probably unfair to compare it at this early stage with the more expensive established standards, the PS4 and the XBox One. The games from the various sources on offer—the Google Play Store, the Shield Games hub and the nVidia streaming subscription service GeForce Now—seem all to be at least a few years old, and will be of limited appeal to dyed-in-the-wool gamers. But the Shield’s neat, compact form-factor guarantees it a place in any living room, and it’s mostly as a general purpose set-top box and multimedia player that I’ve been reviewing it here.

There’s no question that the Shield, with its Tegra X1 processor and its 256-core GPU with 3GB of RAM is considerably more powerful than Amazon’s offering. But this factor really only shows up in action games, and, as I’ve suggested, action gamers used to dedicated gaming PCs and/or consoles may well find the Shield too lightweight. If we put games to one side, the Amazon Fire TV Box with just its remote control, at nearly half the price of the Shield, starts to look like a bargain.

But you could apply the same logic to the comparison between Amazon’s Fire TV Box and its Fire TV Stick. The games the Fire TV Box can play (like Asphalt 8) won’t run on the Stick. But if we’re just looking for a network multimedia player, the modest little Amazon Fire Stick (which thanks to the adbfire app accommodates Kodi very nicely), costing only £30, will leave you with a lot of change in your pocket.