WHEN THE FIRST MOTO G arrived at the end of 2013 it was a true market disrupter as a low cost, fully equipped smartphone. Although primarily aimed at emerging markets — it was Motorola’s all-time best-selling phone and became the top selling phone in Mexico and Brazil — the Moto G was also made available here in the UK, where its ground-breaking price of just £135 unlocked found it a lot of fans.

The Moto G philosophy of a no-fuss, well-equipped phone running the latest and promptly updated version of more-or-less plain Android has been carried over to the latest 3rd Generation, the Moto G XT1451. I’ve been kicking one of these around for a couple of months now, delaying my review as Motorola also seems to have been using me (along with other reviewers who attended the launch at the end of July) as a beta-tester while the company fine-tuned some of the software.

After several updates, including an update to the operating system, that all seems to have firmed up now, and it’s time to get down to an assessment.

The first generation came with 1GB of RAM, a choice of 8 or 16GB of internal storage and, originally, no option of adding an SD card. A later iteration of the same phone, still  calling itself “First Generation” added LTE and the option to install up to 32GB of microSD flash memory. This review sample of the 2015 version of the Moto G will also do LTE and comes with 2GB of RAM, 16GB of internal storage and a microSD slot that will take up to 32GB. A cheaper version of the same phone, selling at £135, includes only 1GB of RAM and 8GB of storage.

I’m going to lay down the law here and say that you don’t want the 1GB version. Or more precisely, that you’ll only want it if you’re a smartphone beginner, in which case there are other cheaper phones you should be considering. A single GB of RAM these days is tight in an Android phone, and experienced users will find themselves having to sacrifice apps to regain space. So let’s talk about the fully-fledged 2GB/16GB version of the Moto G 3rd Gen that sells on Amazon for £180.

This moves it into the mid-price range, which rather blows the original idea behind the first Moto G. The phone is still true to the concept of running near-vanilla Android with timely updates — currently it’s Android 5.1.1. And the physical design is very similar, although it now follows the larger form factor of the 2nd Gen iteration, with a 5″ rather than the original 4.5″ screen. 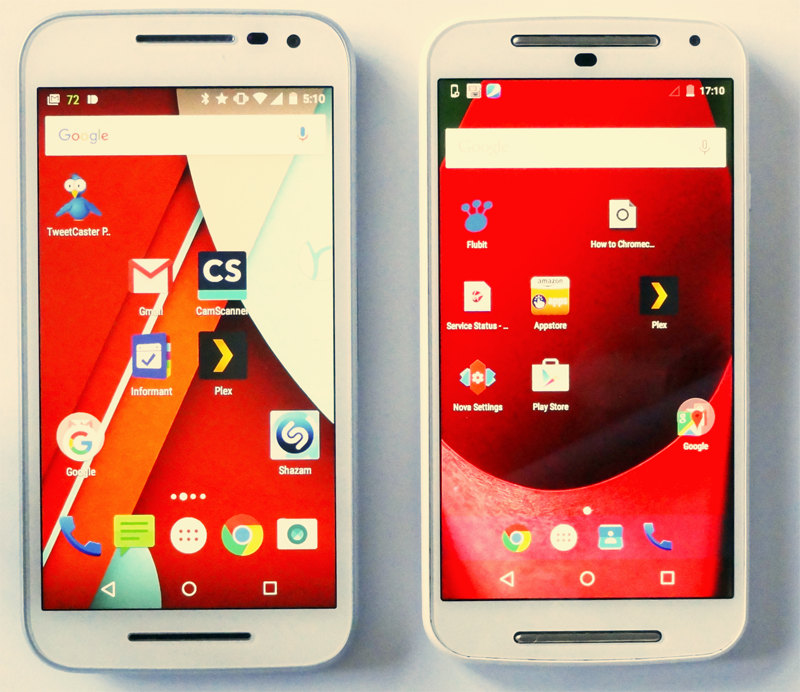 Both this year’s and last year’s Moto Gs have a two front-facing grills, but only last year’s (on the right) are a stereo pair.

In fact the external similarity to last year’s model is striking, to the extent that I was initially completely mislead by the two front-facing speaker grills at the top and bottom of the screen. On last year’s XT1039 these formed a stereo pair that gave a very pleasing sound field for watching movies. The new version has a very similar pair of slot-like vents, although the upper one is now slightly shorter than the lower one. But when I tried playing back music or movies the sound would only come out of the lower speaker. Initially I thought my phone was faulty. But a technical enquiry revealed that only the lower speaker is supposed to be active: the upper grille is just the earpiece for when the device is used as a phone.

One subtle change is the very slight raising of the faux aluminium plastic rim around the front face of the phone. On the previous model this was almost flush with the glass covering the screen. The change in design of the 3rd Gen version offers a little more protection for the Gorilla glass, but feels less finger-friendly. And this is something that can only become more obvious with use as the plastic surround inevitably becomes dented with wear.

An important improvement is that the new XT1541 now carries PX7 certification. In plain English you can drop it into a 1 meter-deep pond and leave it there for up to 30 minutes without harming the electronics. Not that I’m recommending you do so, and not that I’ve even tested this in the bath, but that’s the manufacture’s guarantee. With one caveat: the click-on plastic back has to be very firmly pressed home all round, including the centre section that surrounds the camera lens and LED flash assembly.

The 2nd Gen version (left) was dual SIM, but the 2015 3rd Gen version in the UK comes with only a single SIM slot.

The back’s removable, not, alas to allow the battery to be replaced (the Motos have never gone in for this) but just to give access to the microSD card and SIM slots. Some versions of the new Moto G are dual-SIM, as was last year’s 2nd Gen Moto G, but the extra SIM slot has gone missing in this year’s UK version.

The removable back is also part of Motorola’s “Moto Maker” scheme, originally introduced for the more costly Moto X that lets you choose your own styling when you first make your purchase.

Motorola would like me to tell you more about this scheme, as it’s one of the company’s Unique Selling Propositions for this line of phones, but at the time of writing the relevant Web page (at https://www.motorola.co.uk/motomaker) is inaccessible to any of my browsers, which all report it’s triggering too many redirects. Moto Maker aside, the removable back means you can ring the changes on your XT1541 at any time by choosing from a range of ten different colours if it’s just a plain back you’re after, or five different colour schemes if you opt for the “Flip Back”, which includes a hinged screen cover.

There’s a lot to like about the Moto G 3rd Gen, especially the waterproofing, the plain, bold styling and the 155 gram heft of a well-made product in the hand. I didn’t at all mind the (by today’s standards) rather low resolution IPS 720p screen — it’s clear and bright and does the job and as far as I’m concerned is filled with quite enough pixels for a 5″ display. The 13 megapixel rear camera never let me down, and the front-facing 5 megapixel camera though unexceptional has faithful colour rendition. I particularly like the way either camera can be motion-activated from a standing start with just a double flick of the wrist.

But the big “but” is Motorola’s pricing. At around £180 for the 2GB/16GB version the Moto G 3rd Gen isn’t going to disrupt anybody’s market. It’s a fair price, but up against a lot of competition, now that the lesser known  Chinese manufacturers are beginning to get their teeth into Europe.