Shutting the bathroom door last week I managed, stupidly, to slam it against my big toe. There was pain and there was blood. And words were spoken.

Tested Technology doesn’t usually over-share like this but the incident is germane to this review. When Omron offered to send us their wonderfully Victorian-sounding “HeatTens Pain Reliever” I’d already had previous experience of TENS technology when I tore my rotator cuff early last year. I’d also taken to using a TENS machine occasionally to relieve symptoms of osteoarthritis.

At the time the Omron HeatTens arrived, I had no particular pain to deal with. Just write it up technically for the readers? Explain the rather interesting technology of Transcutaneous Electrical Nerve Stimulation? Report on my past use of a previous, similar device?

And then the bathroom door… 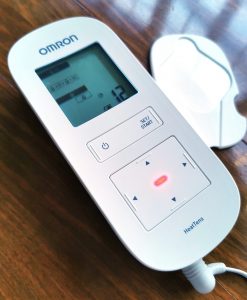 THE TECHNIQUE OF USING ELECTRICITY in the 21st century to relieve pain does have, like Omron’s name for the device, something of a Victorian ring about it. Back in the early 19th century, electricity was the big new thing and was turning up everywhere. Even so, devices like Faraday’s “Faradic Electrifier” had their antecedents in the 18th century ideas of Benjamin Franklin.

But long before that, the ancient Romans had discovered that pain could be numbed by taking a bath with an Electric Torpedo Fish. It can be soothing to think that when you stick the Omron pads to your skin you’re just following a tradition that reaches back to the 8th century BC. 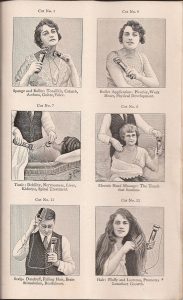 The technology we know today as TENS was formalised in the 1970s from a medically dubious consumer device, a hangover from the Victorian era called the Electreat.

As with hearing aids, the invention of the transistor radically changed the scale and scope of an earlier elementary product into something that could be precision engineered to deliver tailored real value to the individual patient.

Unlike its antecedents, TENS never claims to cure. The electric pulses sent across the surface of the skin essentially offer temporary relief from pain by scrambling the local neurotransmitters.

That’s the official view. However…

More permanent beneficial side effects have been recorded: electrical activity encourages the blood supply in its healing and the production of endorphins in the area of the pain can induce a feeling of well-being that hastens recovery.

Turning Up the Heat

As its name implies, the Omron HeatTens adds an extra dimension to the therapy. The two pads don’t just emit high voltage, low amperage electrical impulses. They also heat up.

This programme alternates between heat and pulses.

These two processes occur in succession. When the pads quickly warm up, to a temperature you set to be either 42° or 43°, the pulses pause. And when the pulses resume the heat shuts off.

The programme I’ve mostly been using (represented on the Omron HeatTens screen by the ancient Egyptian hieroglyphics above) gives 30 seconds of heat followed by a minute of pulses, this pattern being repeated over the course of 30 minutes. The manual calls this Combo 2

Whichever programme you choose, your therapy session runs for 30 minutes, after which the machine shuts down. Of course, you can end the session at any time, for example, stopping Combo 1 halfway if you only want heat.

The pulse patterns in the TENS section of any of these three programmes vary from a deep, slow throb to steady tick-tick to a gallop. The manual calls the sequence of these patterns Modes. Which mode you choose is up to you, but Omron recommends using specific modes for each different part of the body. A diagram, affixed to the side of the device, offers guidance on this.

Conveniently, the HeatTens remembers your previous settings next time you switch it on.

Why heat? Traditionally, sports injuries have been treated in quite the opposite way—by the application of ice. 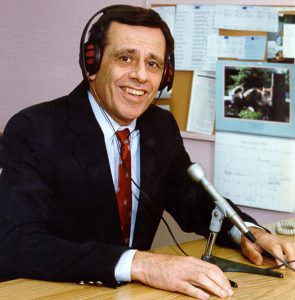 Ice very effectively combats pain by reducing inflammation. Indeed, ice has been the recommendation since 1978, when the controversial populist doctor, Gabe Mirkin, coined the acronym RICE (Rest, Ice, Compression, Elevation), which became official treatment policy across the US and around the world.

In 2014 Dr Mirkin changed his mind, writing: “…now it appears that both Ice and complete Rest may delay healing, instead of helping.” In summary, Mirkin says: Healing requires inflammation.

Movement is currently viewed as an essential recommendation in injuries like frozen shoulder. And a small amount of heat, as provided by the HeatTens, by encouraging natural acute inflammation, is known to reduce healing time.

Omron has generously donated the HeatTENS to Tested Technology. But you’ll be buying it. And at around one hundred pounds, you’re paying a premium for the heat.

*A lucky, timely purchase. I was on the High Street to see whether our local chemist had any capsicum heat plasters (recommended, by the way). They were out of stock. On the way home I popped into the charity shop—and there was the Obi TENS. It’s designed for childbirth (hence the name) but is very useful generally, with a set of four small pads rather than the HeatTens’ two.
The machine I mentioned using for my torn rotator cuff was a Babycare Obi TENS. I picked it up in a charity shop for about four quid*. It needed new pads with leads—twelve of them cost me another fiver from Amazon.

You can buy the Obi TENS from Boots new for about half the price of the Omron HeatTens.

There are also supplementary costs to consider. The HeatTens comes with only one pair of heat pads, so if you want to share it with your family, additional pairs of pads with their leads will cost nearly 18 quid each.

The pads, their leads and the connector to the machine form an integral unit. Other TENS machines allow the pads to be replaced separately.

The gels to stick these pads to the skin, reckoned to last about 30 sessions, are twenty quid for four pairs. These prices are distinctly more expensive than the generic pads with gels used by devices like the Baby Obi TENS. However, third party gels designed for the Omron HeatTens are available direct from China for very much less.

The rechargeable battery also worries me. It has a limited life and Omron says it can’t be replaced.

I was able to get around eight 30 minute heat and TENS sessions on a single charge. The literature appears to suggest that the battery is good for 500 full charges, although at the time of writing I’ve had no confirmation of this from the manufacturer.

The HeatTens charger isn’t listed among Omron’s spares either. This might mean if you lose it you’d have to junk the whole device. Frustratingly, the output of the charger is 6 volts at 700 milliamps, which is within the ballpark of any regular phone charger. But the connector between the charger and the HeatTens isn’t USB.

So is the heat worth the price difference?

You may well decide that it is. Or you may be happy to pay the extra anyway for a neatly designed, very well manufactured machine with a three year warranty from a trusted company that specialises in medical equipment.

Those of you who know more about this than I do will have raised an eyebrow or two at my use of a TENS machine on a bleeding toe.

*Caveat: I am not a doctor. Not in any official capacity. In days long gone, I had a run of performances as Dr Lomax in the ITV medical soap opera Emergency Ward 10.

As a young actor, I took my work very seriously. During breaks, I could be found wading through the many medical tomes that dressed the sets and on one occasion I persuaded a medical student friend to slip me a white coat and smuggle me into an autopsy.

You must make your own assessment of my medical qualifications in the light of this history.

Among the many Don’ts in the Important Safety Information section of the manual (quite literally, a Must Read) is the warning that the pads should only be applied to …”normal, intact, clean, healthy skin…”. Broken skin, blood—definitely a no-no.

On the basis of my medical experience* and because the toe was very painful, I allowed myself some latitude here. I plastered the toe as best I could and applied the TENS pads to the outside of the plaster.

That way I could feel the benefit of the heat and by turning up the TENS into the two figure region received enough of a tingle to reduce the pain significantly.

The other safety precaution I threw to the winds here was the positioning of the pads. The recommendation is to place them no closer than an inch apart. My big toe is not that wide. I calculated that I was allowed some leeway here as we were pulsing through the plaster.

Result: The TENS pulses definitely diminish the pain while they’re being applied. And I think I can fairly say that after half an hour of this my big toe was left with enough endorphins to keep it happy for the rest of the morning.

Since then I’ve also tested the HeatTens on my arthritic knees, given sessions to other family members and done about a dozen dummy runs to test the capacity of the rechargeable battery. Conclusion: the thing does actually do the job.

And—thanks for asking—the toe is coming along nicely.